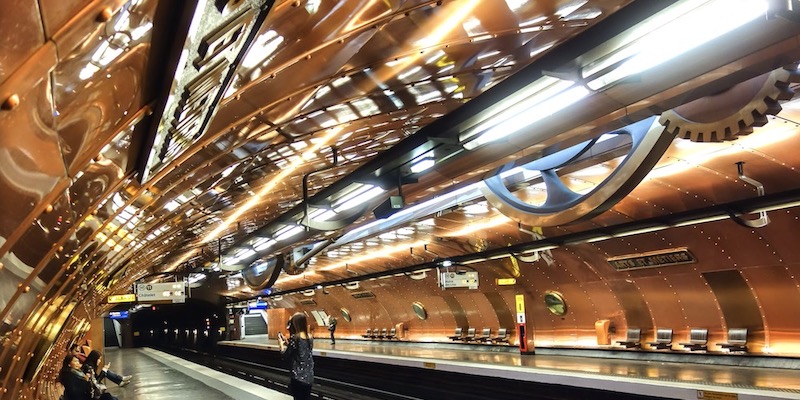 Life below the streets of Paris is almost as fascinating as it is above, as evidenced by the Arts et Métiers Métro station (pictured above) which resembles a glistening copper cauldron. After purchasing a card loaded with ten trips (a carnet) and a quick tap and go at the turnstile on Paris public transit, I descended into the massive complex of tunnels and underground walkways.

Stand warned, though. Very few Paris subway stations have escalators so be prepared to climb endless stairs and walk miles in underground corridors. They have mastered the art of getting around the city underground, but if you’re not in shape before, you will be after. If you have a heavy suitcase you would be advised to take a taxi instead.

The Paris Métro system opened in 1900 and was expanded over the decades so it now boasts 308 stations, 64 of which are transfer stations. The designers cleverly planned each stop/station to be no more than a 500-metre walk from the next station. From my hotel on Blvd. Voltaire, I could walk to at least three stations in less than ten minutes, with one just a couple of hundred yards from the door of the hotel. Now that’s a subway system. Are you paying attention Toronto? We can’t even get a subway to Mississauga.

Enough facts and figures, it’s what goes on in the Paris Métro that I want to tell you a bit more about. Fares are cheap and navigating the system is easy, especially if you have Google to help plan your route. Even without Google, a print map will get you around without any trouble. Each of the subway lines is colour coded, numbered, and well-signed.

One of the most visually appealing stations I saw was the Louvre-Rivoli, but many others like Bastille, Concorde and so many others are equally fascinating. Just like the institution for which it was named, Louvre-Rivoli is illuminated in subdued museum-like lighting with genuine pieces of art displayed in recesses in the wall. Abandoned stations have been repurposed as restaurants, swimming pools and parks. Some of the newer, renovated stations have security gates on the platform so you’re not tempted to off yourself and jump onto the tracks before the trains have come to a full stop in the station.

Some of the Métro stations even have toilet facilities at the platform level. I was rather surprised one day to witness a waiting passenger make use of the cubicle without shutting the door. Fortunately, he was male, was not modest, and had his back to the rest of us waiting on the platform for the next train. The adventures abound.

Overhead digital signage also advises exactly how many minutes we have to wait for the next train so I often used that time to take a load off my feet and sit down in one of the seats provided on the platform. People-watching is a fascinating past-time on the Paris Métro.

Here are a few pictures of interesting people I caught on my travels underground.

This picture is a bit blurry because I was trying to be discreet about photographing three women I remember as The Three Sirens. They were women of a certain age and each one was wearing a bizarre, obviously fake wig. I didn’t want to embarrass them by staring but they were a fascinating trio. Who were they and where were they going? What are their everyday lives like? So many questions. Such fascinating characters.

Hauling strollers and children on the Métro is a challenge at the best of times because it’s difficult to always get a seat and, of course, there’s the issue of all those stairs and few escalators. But two couples with a total of five children were bravely forging ahead for a day at the park or perhaps doing some sightseeing of their own. 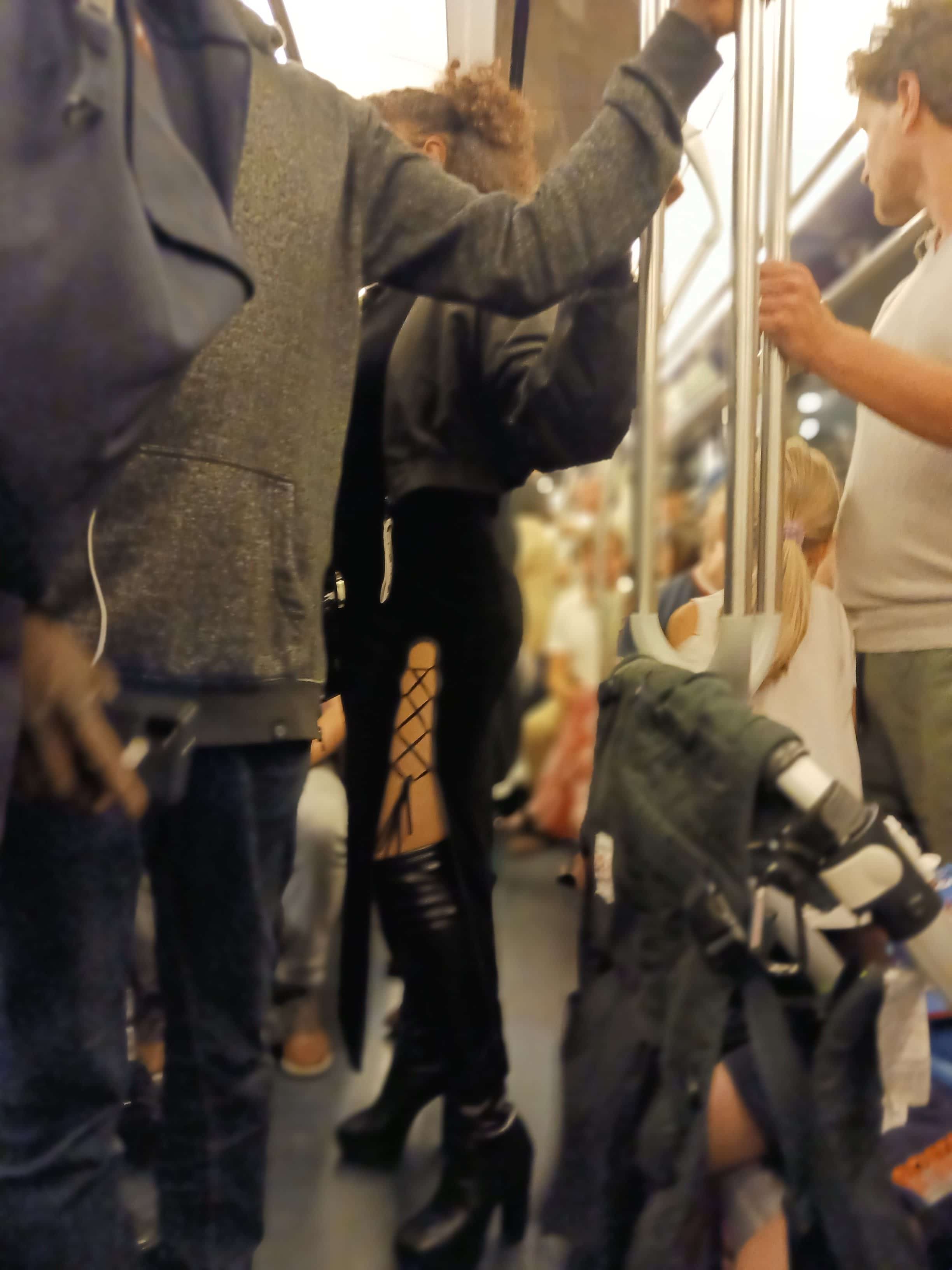 Look closely at the black lace side slit in her skirt and the heavy black boots in June. Is she a “working girl” or simply a trendy and fashionable young woman going to work?

Some of the Métro’s art deco stations have been preserved and add immense glamour to the process of entering the underworld. This one at Palais Royale was a work of art in itself. In the square above the station, people were dancing outside in the sunshine to a live band. Somehow I could not imagine such a scene at Yonge and Eglinton station in Toronto although Dundas Square is a possibility. 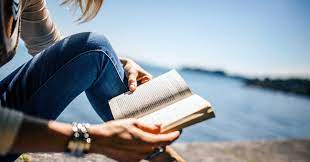