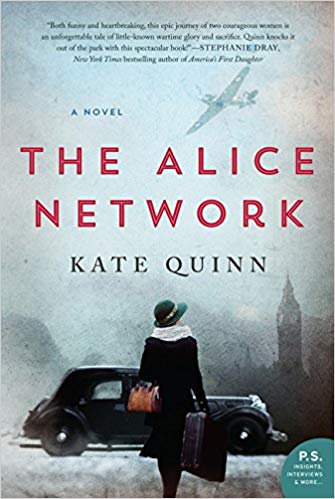 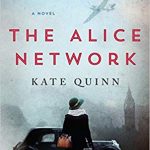 It’s natural when we enjoy a book to follow up by reading another book by the same author. After reading Kate Quinn’s The Huntress I couldn’t wait to dig into her earlier book, The Alice Network.

Quinn has a gift for being able to weave real historical events into fictional accounts with characters based on real-life individuals and composites. The story spans a period of several decades with most of the action taking place late in World War I and the years prior to and just after World War II. The plot centers around three women (similar to The Huntress) who never wore military uniforms but were war heroines nonetheless fighting the invisible and dangerous war of spying, sabotoging enemy positions and communicating intelligence to allied forces in England.

The main characters, Evelyn Gardiner from London, England, Charlotte (Charlie) St. Clair, an American and Louise de Bettignies (Lili) a native of France are drawn together in a common mission to take down a French traitor and Nazi opportunist by the name of René Bordelon. Evelyn and Lili first meet in 1916 when Evelyn is sent to Lille on the northern boundry of France to become part of The Alice Network, a highly effective and extensive network of more than one hundred subversive agents directed and coordinated by petite Lili working to undermine enemy actions, .

Multilingual Evelyn is a perfect spy. With a vocal stammer, she appears harmless and possibly even a bit simple. She lands a job waiting tables in the restaurant in Lille owned by René Bordelon who is not aware of her language skills. He tests his employees to make sure they don’t speak or understand German so he can protect the private conversations of his important German military guests. Her access to Bordelon and his German friends is a major tool in the Allies spy network.

At the end of the second world war in the United States, a young college student by the name of Charlie St. Clair finds herself in the family way without a husband. Her French-born mother marches her off to Switzerland to have the “little problem” taken care of, via Southampton, London and Paris. But Charlie goes on the lam in search of her soul-mate French cousin Rose Fournier who disappeared during World War II. The only information Charlie has to go on to find Rose is the name Evelyn Gardiner at an address in London. Evelyn turns out to be a haggard drunk who pulls a gun on her American visitor and threatens to kill her. Then, the plot thickens.

Charlie produces information about her cousin Rose that connects the broken down Evelyn to her former boss from the first war, René Bordelon. Evelyn relies on a misfit Scottish veteran of World War II by the name of Finn Kilgore to help her with daily life, driving her around, making sure she’s safe. The three strike off for France in search of Bordelon who may not just know the fate of Rose but is also the cause of Evelyn’s horrible physical and mental decline over the years. They’re not even sure he’s still alive but they have a score to settle.

The story moves along at a comfortable pace and it was easy to stay engaged. As with her Huntress book, I found the romance to be a bit gratuitous but I suppose it’s all part of good story-telling.  And I’m always annoyed when the timeline jumps around, back and forth between the two wars. I’m a simple person; I prefer plots to unfold in chronological order. The Alice Network takes us on an ambitious romp around northern France. The story ties real historical events and composites of real people together in a compelling tale that kept me reading right up to the end. At times the writing resembled a romantic bodice-ripper but it did the job of keeping me engaged and entertained. I’d give it 7 out of 10.

To order The Alice Network from Amazon, click here.