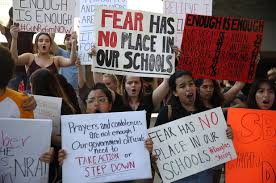 I’m surely not the only Canadian who is sickened, angered and appalled by Donald Trump’s reaction to the Florida school shootings. His solution? Arm teachers, but only the ones “who have the aptitude for using a gun”. And they’ll receive a ‘bit of a bonus’ for the extra training to carry and deploy a weapon.” Turn schools into a free-for-all shooting range. Imagine armed swat teams patrolling the halls of your child’s school. That thinking is absolutely insane. They’re also proposing that schools should be equipped with airport style security metal detectors at entrances. These band-aid responses totally ignore the cause of the problemâ€”too many guns. As the anti-gun advocates say, “Mental illness is global; mass shootings are unique to the United States.” The craziness is out of control and if it’s keeping me awake at night, I’m probably not the only one.

We all have friends, family members or acquaintances who are teachers. Teachers are people who went into the profession because they are kind, patient, caring women and men who enjoy promoting and sharing knowledge with children and youth, not hate and killing. School is a place for meeting and making friends, not enemies and killers. Imagine one of the teachers you know being asked to take weapons training and packing a hand gun? It’s so inconceivable it’s ridiculous. As I’ve said before, remove guns from the general population and then no one will need guns. The United States is the only country in the world that doesn’t understand this simple concept.

Surviving students from Marjory Stoneman Douglas High School in Parkland, Florida who visited the White House came away this week feeling their concerns were not heard and certainly not understood. Trump even had cue cards in his hands reminding him to say “I hear you, I understand” because he most certainly did neither and had to be prompted to parrot someone else’s words. If the politicians won’t listen to their children, what chance do they have? The anti-gun lobby in the United States has been impotent against the mighty NRA and they need to up their anteâ€”out-muscle the bad guys. Politicians will address the protests and create a couple of lame-duck new laws that fail to address the root of the problemâ€”guns have no place in society. The NRA contributed $30 million to Trump’s election campaign and he made them promises he intends to keep. Trump’s idiotic pro-gun stance is no doubt bolstered by the fact his sons are “big game hunters”, the horrific and immoral sport of shooting helpless, beautiful animals in the wild for trophies.

I no longer watch local news on television because the litany of shootings, robberies, preventable car accidents, scams and violence is just too depressing. It leaves me angry, frustrated and emotionally drained. In order to keep abreast of what’s happening politically and in business I sometimes watch the national news but it too has become too much to bear. From now on, I’ll just make supper in silence or listen to music and talk to the dog. No news is the only way I can save myself.

Appreciate your feedback. Thanks Mr. T.

The 2nd amendment has been stretched and twisted far beyond its purpose when written in 1791….. “right to bear arms” has now become the right to buy a semi automatic gun by the general public….. absolutely not the intention of the amendment. Guns have replaced the interpretation of the word “arms” and has become a dangerous addiction growing in its own category. America needs to get a grip on this…… THEY ARE KILLING THEMSELVES. Their innocent children, who go to school to learn, feel safe and dream of a better future, are being senselessly slaughtered. How much stronger can a… Read more »

And he’s doubling down on stupidity. Thanks, Gail.

Living in Negril Jamaica all winter means spotty reception and wifi. I’ve been thinking it’s a blessing now with a blockhead in the Whitehouse. Bring on the reggae.

Ironic isn’t it. Bring on the music. Thanks for your comments Francesca.

I empathize (sp?) with you so much. At times it makes you feel the world has gone mad……at least in the USA. I too had to shut my television off the other day while Trump was talking to a group of goons in some Republican Town Hall. I wanted to SHOOT him.

Too true! Peace be with you! Thanks, Susan. Glad you’re still tuned in.

A very good analysis of the situation Lynda.ðŸŽ¼ðŸŒžðŸŽ¶ðŸ™ðŸ»