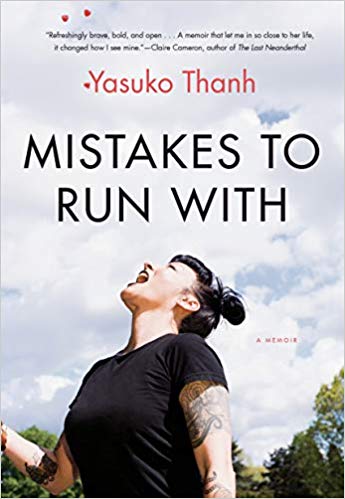 Despite the proliferation of helicopter parenting these days, there are still far too many children who are unloved, unwanted, mistreated, and, tragically, abused. Mental illness often plays a major role in the lives of many parents and children who through no fault of their own are unable to negotiate a happy, fulfilling life. Canadian author Yasuko Thanh’s Mistakes to Run With: A Memoir is such a story. I wasn’t sure what to expect when I began reading her memoir but as the story unfolded I was alternately appalled and transfixed.

Born in 1971 to a Paris university-educated Vietnamese father who spoke several languages and a German mother, Thanh’s life was difficult from day one. Her parents had immigrated to Victoria, British Columbia and were immediately cast into poverty in their new country. Two years later, a baby brother joined the family and became the preferred child, the golden boy. Despite getting top grades in school and excelling in whatever she undertook, Thanh was never good enough in the eyes of her parents. Coupled with this challenge, as she grew into a teenager, she displayed all the signs of borderline personality disorder. This manifested itself in destructive behaviour, dropping out of school and eventually living on the streets.

Thanh’s description of her life is shocking and graphic. From the age of fifteen, she lived rough, sleeping wherever and with whoever passed through her life on a daily basis. Her friends were bikers, drug addicts, criminals and prostitutes. She sold her body for money and traded her soul for whatever love she tried to extract from friends, pimps and addicts. Always feeling unworthy, she attached herself to a series of bad choices in men, always searching for the words she never heard from her parents: “You are good. You are worthy. You are valuable.”

Living on the streets was a daily challenge to survive. She risked beatings, rape and even death from her “dates” but she turned all her earnings over to her pimp in a vain attempt to earn his love. One particular pimp by the name of Kyle was a coke addict and a part of her life for several years. Before they finally parted ways, he’d blown through more than half a million dollars she’d earned for him.

ReadingÂ Mistakes to Run WithÂ reminded me of another book I read a few years ago by Montreal writer Heather, O’Neill,Â Lullaby For Little Criminals”. Thanh’s story is also similar to that of another Vancouver author Evelyn Lau, whose life story was featured many years ago in a television movie starring Sandra Oh. The tragic lives of young girls who fall prey to street life are truly heart-breaking. Very often, all these young girls want is to be loved by someone but they do not have the resources or mental acuity to make better decisions.

After ten years of life on the streets of Victoria and Vancouver, Thanh, who constantly journaled and submitted writing for publication, decided her life would be more fulfilled as a person and a writer if she had a child. She was making enough money from a grow op to provide a living without working the track. Her first baby girl is followed a couple of years later by a second. Then, she discovers how truly difficult life can actually become when all of a sudden she has three people to take care of, not just herself. She naively dreams of a future life with a loving family and home of her own. Naturally, these ambitions are always beyond reach.

Moving from one ill-chosen partner to another, Thanh eventually graduates from life on the street to an unhappy life with a series of dead-beats. Fortunately, there are mental health and medical services available to street people which enabled her to get help when she needed it. She eventually is able to sell some of her writing but as her professional life develops, her personal life takes a series of tragic hits. In her forties, her mental illnesses are finally properly diagnosed and she struggles with assorted treatments that have limited benefit. The book does have a happy ending but it’s a hard-won battle. Her writing is wonderful and despite the frustration of reading about a life-time of failures, the story is gripping. We’re constantly rooting for her, hoping her obvious intelligence will pull her up and out of the depths to which she descends. Be prepared for a tragic story, graphically told. It’s an amazing book and I rate it 9 out 10.