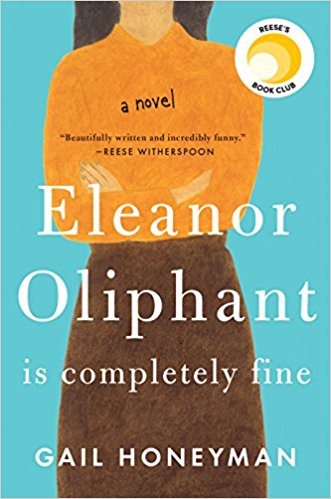 When I first began reading Eleanor Oliphant is completely fine by first-time author Gail Honeyman, it felt like a riff on Bridget Jones. Right from the beginning I had a smile on my face as I read her words. The first-person narrator, Eleanor is a thirty-year-old unmarried woman who works in Accounts Receivable for a graphic design company in Glasgow, Scotland. She appears to function on the low end of the Asperger’s scale as evidenced by her repetitive, boring routines and odd perspective on the rituals of life, while possessing obvious intelligence. Her peculiarities make her the butt of behind-the-scenes jokes by coworkers and she has an endearing appreciation for vodka.

The underlying message, however, is that Eleanor has a past. Her relationship with “Mummy” is complicated and references to a fire while she was a child make the reader want to know more about why she is the way she is. If you’re as old as I am you may remember The Tracey Ullman Show on television in the eighties. (As a side note, that’s where The Simpsons debuted as short segments between Tracey’s brilliant character sketches.) Anyway, Eleanor Oliphant reminds me of Tracey Ullman’s character called Kay, pronounced Kyyyye, a repressed colourless English spinster of indeterminate age who is dedicated to the well-being of ‘Mummy’.

When Eleanor develops an over-the-top crush on a male musician at a charity show, she sets out to remake herself as someone worthy of being his wife. Envisioning a fantasy future with the object of her affections grows in her imagination and she begins a process of rebuilding her persona. At the same time, Eleanor is befriended by Raymond, the similarly socially challenged I.T. technician who works in her office. One day as they’re going to lunch, they witness an elderly man, Sammy pass out on the street and they come to his aid. Raymond accompanies the man to hospital in the ambulance and Eleanor is unwittingly roped into following up on his well-being. They begin a tentative friendship with Sammy and his family with positive results for both Raymond and Eleanor.

The story is charmingly written and at times I burst out laughing as I read Elinor’s descriptions of her life. While she appears a misfit, she’s a sympathetic character and we want her to win whatever battles she’s fighting. Toward the end of the book, the pieces of the puzzle come together and I almost felt guilty about laughing at her earlier experiences. It is in fact dark humour with a happy ending. I loved reading Eleanor Oliphant is completely fine. It’s an amazing book and I can’t wait for more by Gail Honeyman.

[…] days. Now, I can hardly wait to read her latest book My Year of Rest and Relaxation. If you liked Eleanor Oliphant, you’ll probably enjoy this one too. I’d rate Eileen 9 out of […]

Such a positive review! I have reserved it! Thankyou.

I loved it too.

We have similar taste. Thanks for commenting.