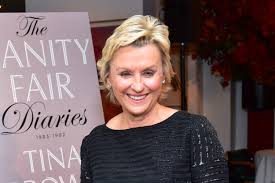 What could be more enthralling than reading someone’s diary, especially someone who regularly rubs shoulders with the rich and famous? It feels forbidden, furtive, even a bit titillating. We’re discovering that person’s innermost thoughts, opinions and impressions in the context of their daily life. And when that life is one lived in the rarefied circles of Tina Brown, editor of Vanity Fair magazine from 1984 to 1992, it’s delicious beyond words. Which explains why I binge-read her book Vanity Fair Diaries in three or four-hour bursts until my eyes wouldn’t focus any longer. Brown is responsible for those avant-garde covers of a naked, pregnant Demi Moore and a moonwalking Michael Jackson.

Tina Brown is an upper middle-class British-born baby boomer, educated at Oxford University. At the age of twenty-five, she was hired to revitalize that famous British magazine, Tatler, which she did with skill and originality. Five years later she was bored and started looking for new opportunities. Across the Atlantic, CondÃ© Nast in New York City was looking for someone to breathe new life into their ailing Vanity Fair magazine. After a six-month mating dance, Tina Brown was hired. Along with her husband Harry Evans, former editor of The Times of London they moved to New York, found an apartment, bought a weekend retreat on Long Island and began the dizzying life of news makers and reporters. She systematically dismantled the old VF staff and rebuilt on new foundations with creative people she knew could produce and deliver her vision.

Naturally, any shakeup in business involves casualties. The politics and behind-the-scenes psychological games required to get a successful magazine to print involve a mind-boggling complex skill set of business smarts, networking connections, branding, marketing, creativity and ego management. Any senior business manager will confirm that one of the most difficult aspects of the job is handling the personnel issues and this is particularly true when dealing with sensitive creative types. Toss ego, personal wealth and power into the mix and it’s a volatile brew.

The name-dropping in this book is unavoidable and reading her accounts of interactions with famous people over the years is fascinating.Â  Her descriptions of daily events range from educational and informative to bitchy and salacious with wonderfulÂ and rather prophetic observations sprinkled throughout the book:

On observing the working women in the office of her real estate agent: “Looking at all these tense New York women, a little frayed, a little underpaid,Â  enough to keep them hooked on their careerÂ  path but not enough to finance escape. I felt they are the new prisoners of the American dream, always working harder than the guys and dealing and redealing the paperwork.”

On trophy wives: The perennial irony here is that men still have all the cards. “They can be driven bastards for years and ignore their kids. Then when they mellow out they can have a younger wife, a new family, and all the perks of a fresh start.”

On the pursuit of acquisition: “Without any market research he has crystallized the current longing for tradition and what he describes as the ‘lack of loveliness in the rootless, unbeautiful lives of the modern American woman who knows that deep down all the running is leading every day to a lesser life.”

On dealing with male entitlement: “On the Washington shuttle on the way to Kay Graham’s seventieth birthday party . . . I am sitting across from the Wall Street investor and CEO of CBS, Larry Tisch. He asked me to reach up to the overhead compartment to get down his jacket and I tipped it upside down so all his money and pens and credit cards rained down on his bald head, and he had to grovel around under the seat and retrieve them.”

On working mothers’ quality time with children: “Quality time is a myth. Babies want slow, wasted time together, not intense nose-to-nose ‘involvement’. There is no comparison.”

On (prophetically) reading Donald Trump’s The Art of the Deal in September 1987: “It feels, when you have finished it, as if you’ve been nose to nose for four hours with an entertaining con man and I suspect the American public will like nothing better. . . Marie has been able to establish such a pattern of lying and loudmouthing in Trump that it’s incredible he still prospers and gets banks to loan him money. . . He’s like some monstrous id creation of his father, a cartoon assemblage of all his worst characteristics mixed with the particular excesses of the new media age. The revelation that he has a collection of Hitler’s speeches at the office is going to make a lot of news.”

On technology: January, 1990: “By the mid-nineties computer owners will be able to buy everything from their home offices and retail marketing will become a dinosaur.”

On the importance of political skills in business: “Having political instincts is always underestimated as a requisite for hiring. In fact, calling someone ‘political’ is usually pejorative, implying manipulation and distrust, but many jobs are impossible to succeed at without political skills.”

On being patronized by male superiors for “throwing money around” :” As if I am some ditzy girl run amok with the budget . . . instead of acknowledging our 63 percent rise in circulation and tripling of ad pages from 431 in 1985 to 1,193 today (April 1989). So fuck all the naysayers. I am so over being patronized by know-all guys.”

Brown is candid about money issues. She started working at Vanity Fair for a salary of $130,000.00. She’s forthcoming about her real estate costs, raises and salary negotiations. Like most women, she toiled for years earning less than men in her profession who oversaw magazines with smaller circulation, less ad revenue and generating less profit than VF. We’ve all been there, but Brown eventually made the smart decision to have a professional third-party negotiate her compensation package.

I’ve always envisioned being reborn in my next life as editor of national women’s magazine. Not the kind that gives you tips on how to cope with the crush of holiday entertaining or how to ensure your kids get into the best Montessori schools, but the other kind, like VF or MORE magazine, that beacon for ‘women of a certain age’ that was sadly discontinued a couple of years ago, first its Canadian edition and finally by its American publisher. MORE was an intelligent mix of business advice, fashion, current events and general interest pieces for mature women with interests beyond hearth and homeâ€”sort of a VF lite.

A few months ago I readÂ The Price of Illusion by Joan Juliet Buck former editor of Paris Vogue and having just finished Vanity Fair Diaries by Tina Brown, I’m reconsidering my career ambitions for my next life. I must say, Vanity Fair Diaries is a guaranteed page-turner. It’s not a memoir reflecting on times past, but an actual diary written in real-time. It reads like a time capsule allowing us to compare how things and people turned out over time. While being editor of such a glamorous and relevant magazine may seem like a dream job, there’s a lot of hard work involved. The constant churn of political manoeuvring, business strategizing and networking is physically, mentally and emotionally stressful and the demands on personal time make home and family life challenging.

In the midst of all this, Brown had two babies, one with developmental challenges resulting from premature birth, and she still managed to maintain her love affair with her husband. She constantly struggled with the bilateral demands of trying to be the best mother she could be and the best magazine editor she could be. That’s a tall order for anyone. I must admit I might not be up to the task, much as I think I would like the job. Perhaps I’ll have to settle instead for living the life of editor of a national magazine vicariously through reading books by wonderful, talented women like Tina Brown and Joan Buck. In the meantime, I’ll just stick to blogging with my staff of one (me), my limited and precious readership (you) and no politics, ego or money involved. Well, maybe a bit of ego (mine) but that’s the joy and benefit of being your own boss.

[…] years ago I read Tina Brown’s memoir The Vanity Fair Diaries and enjoyed every page. You can click here for my review. I devoured The Palace Papers. It is a rather lengthy book with a sense of morbid fascination that […]