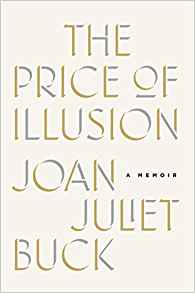 A popular song from 1969, Where Do You Go To My Lovely (click here to listen) by Peter Sarstedt played in a steady loop in my brain as I was reading The Price of Illusion, a memoir by Joan Juliet Buck:

“You talk like MarlÃ¨ne Dietrich
And you dance like Zizi Jeanmaire
Your clothes are all made by Balmain
And there’s diamonds and pearls in your hair, yes there are

You live in a fancy apartment
Off the Boulevard Saint-Michel
Where you keep your Rolling Stones records
And a friend of Sacha Distel, yes you do. . . ”

That song, although written long before Joan Juliet Buck embraced the lifestyle it describes, could have been her life. The Price of Illusion, a memoir by the former editor of Paris Vogue is a fascinating read. The story of her childhood drags a bit in the beginning but picks up when she becomes a young woman and begins her peripatetic transcontinental life. Buck was the silver spoon only child of Hollywood producer Jules Buck who was responsible for such memorable films as Lawrence of Arabia and Goodbye Mr. Chips starring newly discovered Peter O’Toole. She lived a transcontinental lifestyle in Paris, London, New York and Los Angeles, spending much of her childhood in Ireland at the home of her godfather, John Huston. There, she formed a life-long friendship with his daughter Angelica.

Moving in such illustrious circles obviously positions her to name-drop many famous people in the worlds of entertainment, politics and business. At first I found this off-putting but soon I was enjoying the rare first-hand insights into a world of wealth, glamour and superficiality. I learned the high life is not all glamour and glory. While Buck was an enthusiastic participant in all forms of pleasure, her highest highs were achieved while overseeing the rebirth of Paris Vogue from its traditional, staid format to a more edgy, avant garde publication. Under her stewardship in the nineties, the magazine doubled its readership and appeal.

Buck is an excellent writer and her brutal honesty combine to produce a wonderful read. I was halfway through the book before reaching her Vogue years but it was worth the wait. Being close friends with such icons as Yves St. Laurent, Karl Lagerfeld, Charlotte Rampling, Lauren Bacall and Angelica Huston, Buck transports us into worlds we would otherwise never be able to access. Like any human being, her life is composed of extreme highs and correspondingly debilitating lows. When she was sabotaged by a business associate at Paris Vogue and sent to rehab on false charges of addiction, her life unravelled. Losing her job along with its corresponding salary and benefits meant she could no longer support her ailing father. No matter how charmed one’s life may seem, no one escapes pain, loss or disappointment, even the privileged.

The Price of Illusion is obviously the story of a woman who lived most of her life in a superficial haze of privilege. As a life-long journal keeper and a keen observer of human nature, Joan Juliet Buck treats us to a view of the glamorous life that undoes many of our misconceptions. Her recollections and challenges along the way make for a fascinating read. As someone retired from the corporate world, I found the business and political challenges she encountered along the way to be particularly interesting, especially since I plan to be a magazine editor in my next life. Although I was unsure I would enjoy the book when I first began reading, I was soon swept up in the excitement of a life lived in realms beyond what any ordinary person would ever experience. And, ultimately, that’s the essence and joy of reading. I escaped into another world and thoroughly enjoyed the adventure.

To order The Price of Illusion by Joan Juliet Buck from Amazon, click here.