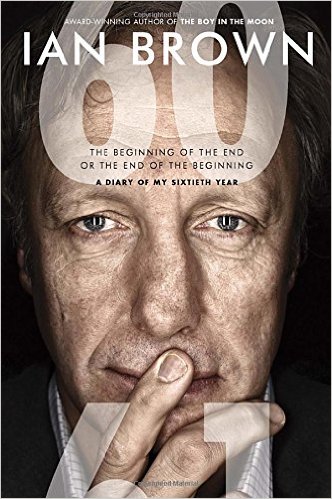 This morning when I looked into my hated 10x magnification mirror I was horrified to see at least six new wrinkles on the side of my face that I swear to God weren’t there yesterday. Such is life when you’re in your sixties, a phrase and age which still sounds strange and unrelated to me, as my brain is happily operating in the sixties, the good old days of trim waistlines, mini-skirts (the first-time ’round) listening non-stop to the best music ever, and discovering sex. This mindset uniquely qualifies me to appreciate the truths Ian Brown writes about in his new book, Sixty, The Beginning of the End, or The End of the Beginning. Brown is a feature writer for The Globe and Mail and a somewhat disillusioned and curmudgeonly baby boomer. As he approached his sixtieth birthday he decided to chronicle the year-long event of living his sixty-first year, diary-style with the hope of extracting and sharing some wit and wisdom from the experience.

I absolutely loved Ian Brown’s book. If I have one criticismâ€”and it’s minorâ€”it’s that he’s too hard on himself. I worry that he might be suffering a low-grade depression. He seems to have arrived at the threshold of retirement with a sackful of regretsâ€”that he didn’t write the great novel he always planned to write; that he isn’t better off financially; that he no longer has the physical and mental prowess of his misspent youth. Brown is heavily influenced and inspired by Norwegian writer Karl Ove Knausgaard’s My Struggle, an articulate, reflective and minutely detailed six-volume account of his daily life. And Knausgaard is only forty-five years old. Brown compares this influence to the background characters on the album cover of Sergeant Pepper’s Lonely Hearts Club Band that The Beatles “carried around in their heads, the friends upon whom they leaned for rhythm, for infusions of courage when they needed it.” 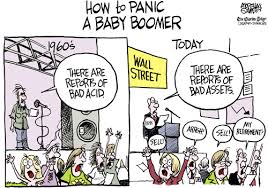 Brown details the inevitable physiological disappointments that accompany agingâ€”prostate concerns, glaucoma, knee pain, plantar fasciitis, hearing aids, rosacea, skin tags and even his recently discovered hemorrhoid that he fondly named George, who has become an important part of his persona, sadly replacing his former preoccupation with sex. As a result of once listening to his mother-in-law and her friends endlessly talking about their operations, strokes and hernias, he promised that he would never do the same. “I would talk about literature and ideas” he says, adding “Now I talk about operations, strokes and hernias. hemorrhoids even. I used to talk about sex but no one wants to anymore. Despite its cynicism, the entire book is written with humour and honesty.

I can only hope he read and was inspired by my blog postings (click here for Build it and Boomers Will Come or Where Will You Be in Twenty Years) because we totally agree on our vision of retirement accommodation for Baby Boomers, “The current dream among my crowd is to buy a larger residence amongst a group of friends, a small building or multi-unit dwelling and turn it into apartments with a common diningroom and medical help included.” Our generation seems to be unanimous in this vision but no developers are taking the bait/hint.

Perhaps there are boomers who share Ian Brown’s feelings of regret and frustration but I think most of us celebrate the fact that we have safely arrived at our sixties with great memories of our youthful transgressions, accomplishments and overall contentment with a life well-lived. I’m with Winston Churchill on this one. This is just the end of the beginning. We’re now the youngest and probably the healthiest we’ll ever be. Hopefully, we still have some decades left and thanks to retirement, the time to do whatever we want. Perhaps I should have bought the book at Chapters or Amazon.caÂ  instead of downloading it from the library.Â  Sounds like Ian Brown could use the money and I feel guilty that I could be responsible for him subsisting on cat food in retirement. But it’s still not too late for you to pick it up for yourself or a fellow Boomer for Christmas or any other special occasion. Whoever reads it will be glad they did. It’s a fun and informative read.