A couple of days before Christmas when I was running around doing errands, something happened that has remained with me. It was a small, seemingly insignificant incident. As I left the bank, I decided to forgo a healthy lunch at Panera Bread and opted instead for McDonald’s which is handily located next to the bank. I lined up behind a young man perhaps in his late twenties or early thirties, wearing a white shirt, tie, sports jacket and dress pants. I guessed he was probably on his lunch hour from work and like me had opted for convenience over quality. As I followed him to the soft drink dispenser, he accidentally spilled some of his orange pop and apologized to me for his clumsiness. Then, we each walked to our separate tables across from each other. As I immediately began to wolf down my French Fries, my eyes caught him sitting quietly at the next table with his head bowed over his own food and hands folded to say a silent prayerâ€”probably no more than five seconds. 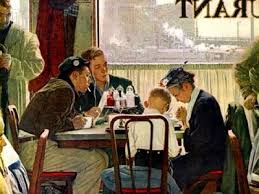 That small gesture of gratitude displayed by this young man touched me deeply and reminded me that not that long ago I too would close my eyes a couple of times a day to be thankful for everything that life has given me. Belief in God, Allah or any organized religion is not a requirement to be thankful for whatever forces brought us to this place. It’s a simple acknowledgement of gratitude. Several years ago when I was experiencing a number of personal challenges, I read the book Simple Abundance. A friend followed up with a gift of the complementary book, The Simple Abundance Journal of Gratitude, which required that I record at least five things every day for which I was grateful. The rules were pretty loose and despite my ongoing daily problems, I managed to come up with little things like, really enjoyed my tea at breakfast this morning or the warm sun on my face as I walked up the street put a smile on my face. After a couple of weeks of this exercise, I realized that I really did feel better and was able to leverage those little slices of gratitude into a more positive outlook and approach to life.

This lapsed practitioner of gratitude is mending her ways. Did I mention that the young man at McDonald’s had brown skin? Perhaps he was an immigrant. But then, we all were at one point, even our indigenous people who migrated from Asia many centuries ago. His gentle humanity impressed me and reminded me that we should always be grateful for our blessings. His small gesture lasting only a few seconds transcended religion, ethnicity, politics, privilege, gender and geography. It helped put me back on track. And for that, I am grateful. In this troubled world, I am supremely thankful that I was born in the kind, tolerant and peaceful country of Canada. Wishing you all a happy, healthy, peaceful and kind new year.

Lynda , I too have the book Simple Abundances. Ever so often I like to open it and read the message for the day…Especially on days like today Jan 1. I also have used the Gratitude Journal in the past.
may you and your family have a wonderful year …

It’s amazing how effective appreciating our little blessings can be. Great to hear from you. Thanks and have a great 2016.. Â Lynda Davis Follow my blog at: http://www.boomerbroadcast.net Social commentary on life from a Boomer Broad’s perspective e-mail: lyndadavis1@yahoo.ca For further insights into the Boomer perspective on business, fashion, mind and body, order my new book, BOOMERBROADcast. It makes a great hostess, birthday or Christmas gift. Click on this link: http://www.lulu.comÂ  orÂ http://www.amazon.com

We each need a little nudge once in a while, Lynda.
With appreciation, and with renewed enthusiasm for our kind and welcoming country…
Happy times –
jacquie

Always appreciate and enjoy your comments, Jacquie. Thanks. Â Lynda Davis Follow my blog at: http://www.boomerbroadcast.net Social commentary on life from a Boomer Broad’s perspective e-mail: lyndadavis1@yahoo.ca For further insights into the Boomer perspective on business, fashion, mind and body, order my new book, BOOMERBROADcast. It makes a great hostess, birthday or Christmas gift. Click on this link: http://www.lulu.comÂ  orÂ http://www.amazon.com