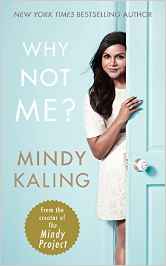 I would sacrifice twenty years of my life for the ability to write like the talented Mindy Kaling.Â  As one of the writers and star of two successful television shows (The Office and The Mindy Kaling Project) as well as two best-selling books (Is Everyone Hanging Out Without Me and Why not Me?), Kaling has earned her place at the front of the class. Until I read her most recent book, Why Not Me? I was only familiar with her name as I by-passed it in the TV guide or in a People magazine cover headline at the grocery store . . . Who is Mindy Kaling?. After finishing her book, I decided to check out her television show only to find it’s on Pay-Per-View and I’m too cheap to pay more money on top of my already horrendously expensive monthly telecom bills, so my assessment is based on reading only this book. But the bottom line is she must have something worth sharing because she is commercially successful, rich, famous and talented, and I am . . . me.

Like David Sedaris, Mindy Kaling has a special way of turning the most common experiences into bon mots of hilarious self-deprecation. Her parents were born in India and Kaling’s success is the result of a combination of hard work and talent rather than the usual Hollywood prerequisites of stick-thin body, synthetic boobs, expensive veneers and blonde hair extensions. Early in the book she acknowledges dreaming of conforming to “normal” standards of beauty and not being remotely successful at it. Good on her for accepting who she is. She confesses that if she devoted less time and mental energy to imagining Bradley Cooper as her mate, perhaps there might be some freed-up brain space for weight-related issues. 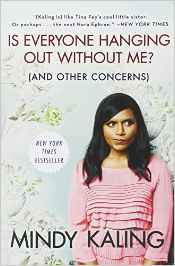 Kaling sums up entitlement as the belief that you deserve something, and in support of deserving what she has achieved, she quotes comedian Kevin Hart, “My name is Kevin Hart and I WORK HARD!!! That pretty much sums me up!!! Everybody Wants To Be Famous But Nobody Wants To Do The Work!” This simple statement is simply brilliant and questions the negative connotation associated with the word “workaholic”. Confidence comes from hard work and like respect it is earned. She advises young people to “Work hard, know your shit, show your shit, and then feel entitled. Listen to no one except the two smartest and kindest adults you know, and that doesn’t always mean your parents.” She’s speaking from a position of experience. I still haven’t seen Mindy Kaling on television; that will happen one of these days. But in the meantime, I admire her writing skills, sense of humour and general philosophy of life, and that’s good enough for me.

[…] reading genres. And as you’ve observed in my earlier book review postings, I really enjoyed Mindy Kaling’s Why Not Me and Sylvia Jukes Morris’s two-volume biography on Clare Boothe Luce, How to Build a Girl by […]