Back in the olden days (the seventies), when I still had a waistline, I read a popular book by Erica Jong called Fear of Flying. All I can remember about the book is that I found it overrated and I really didn’t enjoy it. Am I the only person who didn’t find the book worthy of the accolades it earned at the time and confirmed over the decades. Jong has now published another book that is particularly relevant to Boomers. 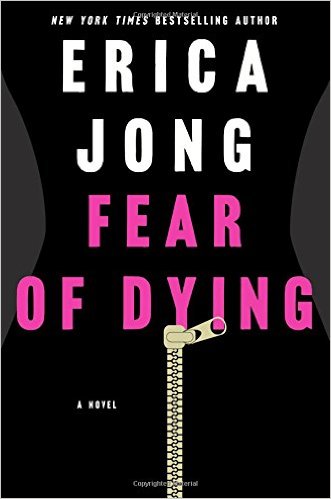 Fear of Dying a work of fiction about Isadore Wing’s wealthy New York friend, Vanessa who is suffering a delayed mid-life crisis. Written in the first person, Vanessa describes her privileged life as a past-her-prime soap opera and stage actress. At the age of sixty she’s coping with issues relating to the loss of parents, loss of youth, loss of sex life and loss of loved ones. Considering she’s married to a billionaire and along with her two sisters, they’ve just inherited a New York apartment that once was the home of George Gershwin and is now worth millions, it’s hard to feel a lot of sympathy for the character. Despite my antipathy toward Vanessa, Jong does present some articulate perspectives on issues Boomers can relate to. There’s the dilemma of watching a terminally ill parent suffer in hospital. “What can you wish for as you watch a beloved parent struggling against the end? Should you wish for death, or life? And how much do your wishes matter?” That’s heavy . . . and familiar.

She takes a sentimental yet practical view on becoming a grandmother and coping with her daughter’s different parenting style. New ecological mothering dogma resists earlier generations’ experience and insists “you were supposed to sleep with your baby, transport your baby in a sling, use cloth diapers, and food-process your own baby food. Motherhood had been turned into a time-and-a-half job in rebellion against my feminist generation. Young women felt madly superior to their mothers because of all that slinging, food-processing, co-sleeping and rigid observance of Dr. and Nurse Sears’ method of baby farming.”

Known for coining the phrase the “zipless fuck” Jong questions the focus placed solely on the orgasm and suggests that “American sexuality was too much like American workâ€”goal oriented . . .The whole body was the instrument of the sexual symphony, and most most people missed it.”Â We often don’t discover this until later in life when the simple pleasures of touching, holding hands and being held are fully appreciated. A particularly interesting chapter was the recounting of the death of her black standard poodle, Belinda. Like most pet owners, we know the end is inevitable and painful but we’re never prepared for the degree of grief we experience at the loss of a beloved pet family member.

Fear of Dying is worth reading if only for the words of wisdom from a fellow Baby Boomer. I don’t know how much of the content is based on Jong’s personal life experiences as she seems to know what she’s talking about when reflecting on serious issues surrounding death. But the story line is silly and unnecessary. She would have been better off writing the book as non-fiction and skipping the superficial plot-line. The author’s own perspective on the fear of dying would have been preferable and more plausible than that of her main character. Vanessa mourns her lost youth and constantly yearns to experience it again. I personally do not share that feeling. Like most Boomers, we’ve grown up and learned that now is really the best time of our lives.