The current federal election, which should be a thoroughly rewarding and honourable component of democracy has turned into a mean, dishonest and insincere display of personal attacks. Politics has a sick hold on me but I’m so fed up with the current election rhetoric that I’ve had to stop watching the latest staged political photo ops and other propaganda on the nightly news. Apart from my disappointment in the pathetic carryings-on of our current candidates for federal office, I’m still smarting from the disgusting, disgraceful conduct of our politicians with regard to the gas plant scandals, the senate horror stories, gerrymandering, the Beverley Hoda affair and assorted other breaches of ethics and trust in our political system. 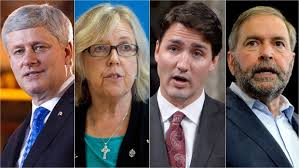 I’m not optimistic we’ll have good government regardless of who wins the current federal election. The politicians lie; they deceive; they are not looking out for the good of the people; they’re merely feathering their own nests and pension plans. I’m hoping for political redemption on the part of our country’s leaders and keeping my fingers crossed that I’ll be proven wrong. After October 19th, I’ll be so glad to wash my hands of this whole dirty election business. The only thing worse is watching an even sadder debacle in the United States. At least in Canada there’s a legal time-limit on election campaigns while the insanity south of the border is non-stop, year-round, year after year. There must be a better way. Whatever happened to “for the people”?

I think they forgot about the people….. you are so right. Between the two countries, I can’t believe the money being wasted on over campaigning. And those damn political phone calls.

Nice to know I’m not alone in my thinking. Thanks.