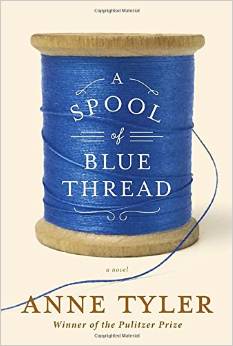 Trying to sell someone on reading A Spool of Blue Thread by Ann Tyler would be like Seinfeld trying to sell network television on his show “about nothing”â€”it sounds like a giant yawn but actually packs quite a punch. After reading The Accidental Tourist (which I absolutely loved) many years ago I immediately put Tyler on my list of must-read authors. Unfortunately, not all her subsequent books were as enjoyable so I wasn’t sure whether this newest one would be able to engage me enough to finish it. In short, it did and I did.

A Spool of Blue Thread spans the lives of three generations of the Whitshank family who live in the Baltimore area, which is the setting for most of Tyler’s stories. The beauty of the story is the ordinariness of the members of the family. But their individual characteristics are so relatable that we can see the similarities of each in someone we know. They’re all painted with a sympathetic brush and while we get impatient at times with their little eccentricities, we see a bit of ourselves in each character so we withhold judgement.

The thread of the story centers around the family dynamic between the second and third generations and reflects on the background of the first generation which set the tone for the family value system. The odd marriage of thirty-year-old “Junior” Whitshank to an unsuitable eighteen-year-old called Linnie-Mae during the depression starts the ball rolling. Their son Red marries Abby; they have three children of their own and take in an orphan as their fourth. Those four children grow up, have families of their own and inevitable family dramas ensue.

As a baby-boomer-aged reader, I could relate to all three generations and appreciate their particular struggles, concerns and challenges. For that reason, I was emotionally invested in each of their lives and kept reading to see how things would turn out. Birth, life, death and all the steps in between are part of everyone’s narrative and I thoroughly enjoyed being a voyeur in the progression of the Whitshank family’s dramas. The book was heavy on dialogue in defining the characters and I would have arranged the chronology a bit differently. She starts with the middle generation in the first half of the book and goes back to the first generation in the second half. I don’t quite understand why she did this except perhaps to keep us guessing about why they were the way they were. It’s easy to broad-brush the family as dysfunctional but I think they’re just a normal family with normal problems.

Pulitzer Prize-winning Ann Tyler has redeemed herself and is back in my good books again with this latest novel. I’m pretty sure you would enjoy it too. If you’ve read “A Spool of Blue Thread” I’d love to hear your take on it. Feel free to comment.

Anne Tyler satisfies the woman in us | BOOMERBROADcast

[…] didn’t find this book as engaging as Tyler’s earlier A Spool of Blue Thread but it was a nice way to pass the time. Willa’s passivity and general “goodness” […]

I recently read this book too and enjoyed it but found that at times I was a bit bored. You can definitely relate to the various struggles and family situations. Overall, I thought it was a good read.

Ann Tyler is a favorite of mine too. I haven’t read this one yet but I’ll keep my eye out for it. I buy most of my books at used book stores (I haven’t embraced the digital book world yet) so I keep a running list of books to look for on my iPhone. Thank you for the recommendation.

I strongly suggest you buy yourself a cheap Kobo (Chapters/Indigo) and learn to use it. They’ll show you at the library. You can then download books free from your local library. I’ve saved a ton of money. If a book is not available you can put a hold on it; they let you know when it’s ready for you to download. Great way to get the bestsellers etc. Have fun. Â Lynda Davis Follow my blog at: http://www.boomerbroadcast.net Social commentary on life from a Boomer Broad’s perspective e-mail: lyndadavis1@yahoo.ca For further insights into the Boomer perspective on business, fashion, mind and… Read more »