The two months leading up to the annual Oscar ceremony in Hollywood is pretty much the only time of year movies are released that appeal to baby boomers. From December to mid-February there are actually some decent movies in theatres that don’t involve monsters, wall-to-wall violence, sci-fi, zombies or irreversible annihilation of the planet. I’ve recently viewed three movies up for awards that I think you might find interesting: 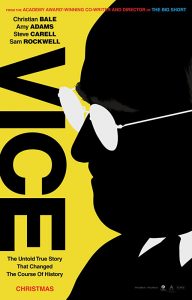 VICE: Christian Bale is a chameleon. His characterization of former Vice-President Dick Cheney is stunning and so different from the Irving Rosenfeld character he portrayed so well in American Hustleâ€”or is it really so different after all? If the current state of America politics doesn’t already make you feel sick, then this movie will put you over the top. Lies, corruption and self-serving politicians aren’t unique to the current administration; it goes back decades and this movie reminds us just how rotten and vulnerable the system truly is. Under George W. Bush, Cheney pulled the strings that manipulated not just a weak, naÃ¯ve president but entire nations, costing untold lives in a wrong-headed war that benefited his private sector interests.

As a side note here, my friend Louise informed me this week that it was Christian Bale who played the young leading character “Jim” in the wonderful film Empire of the Sun in 1987. It was the story of a young British boy imprisoned by the Japanese in southeast Asia during the second world war. It’s worth checking out on your streaming service too. 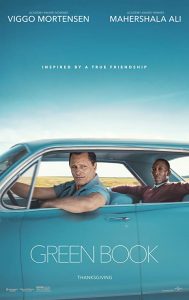 GREEN BOOK: Baby boomers lived through the years of racial segregation, civil unrest and demands for equal rights that characterized the sixties in the United States. It’s not news but there’s so much more to be learned from this movie that throws light on current tensions and the ongoing struggle for change. During the 1950s a small green book was available for African Americans in the southern states that directed them to black-only accommodation, restaurants and other services that existed in a racially segregated country.

When black Jamaican-born concert pianist Don Shirley, otherwise known as Doc Shirley, a classical and jazz pianist played by Mahershala Ali is hired to play a series of concerts in the southern states, he hires tough New York bouncer Tony â€˜Lip’ Vallelonga, played by Viggo Mortensen as his driver/bodyguard. The inevitable racial tensions and conflicts arise and remind us that racial intolerance runs deep in the south and continues to some degree even today. As in the movie The Help, I was reminded that these events took place within our lifetime, not that long ago.Â At the end of the movie, it was revealed that the story was based on real characters and events, which I wish I’d known at the beginning as it would have made the movie even more meaningful.

And, if you haven’t seen Viggo Mortensen in Eastern Promises about the Russian mafia in London, England, it’s a must-see on your streaming service. If you weren’t already a Viggo Mortensen fan, this one will definitely convert you. But it is a tad graphic. 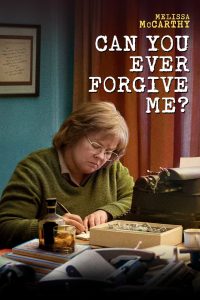 Can You Ever Forgive Me:Â Seeing Melissa McCarthy in a dramatic role was part of the appeal of seeing this movie based on the true life story of writer Lee Israel. In her mid-fifties, Israel was a has-been best-selling author who once penned New York Times best-sellers on the lives of Talullah Bankhead and Dorothy Kilgallen. When her biography of EstÃ©e Lauder failed to sell she was a broke and unemployed alcoholic. Living with her sick cat in a decrepit apartment and several months behind in her rent, she’s desperate for money.

She accidently stumbles on a scheme to make money writing forged letters from famous people like Fanny Brice and NoÃ«l Coward. She discovers there’s a market for such documents and with the help of a similarly down-and-out gay friend John played superbly by Richard E. Grant, they deceive collectors to the tune of more than four hundred forgeries before they are brought down by the FBI. The movie is slow and depressing but I thoroughly enjoyed it. McCarthy was perfection in the role of Lee Israel and the sound track of bluesy music was wonderful accompaniment.

I’m confident you will enjoy any or all of these three movies. While none of them can be called uplifting, they are a must-see nonetheless. Chances are there will be nothing more for baby boomers to go see at the theatre until next December so grab ’em while you can. Or wait and view them on your streaming service if you can manage to enjoy a movie without a bucket of theatre popcorn and an over-priced pail of Diet Coke.

To order a copy of my new book

A really good Christian Bale movie was The Fighter. Loved Viggo Mortensen in Captain Fantastic, A History of Violence (filmed locally in Toronto, Uxbridge, Millbrook) and The Road.
Another excellent Danish actor is Mads Mikkelson in The Hunt and A Royal Affair.
Another favourite actor is Ethan Hawke, especially in Maudie, Before Sunset (a sequel), Boyhood
I love going to the movies to be entertained and like to get my moneyâ€™s worth. These actors are all Academy Award calibre, in my opinion.

Thanks for the suggestions on other movies to check out. Ethan Hawke took me by surprise in Maudie. As a handsome actor I didn’t expect him to be so good as her ordinary, plain husband.

Just watched Empire under the Sun and was reminded what a great actor Christian Bale is, even from a very young age. John Malcovich and Ben Stiller are also in this film….very young as well. Don’t always agree with the Oscar winners but I do have a love for movies on the big screen and the glamour of Hollywood.

Hard to believe Empire of the Sun was more than 30 years ago! Great movies are hard to come by. Thanks Gail.