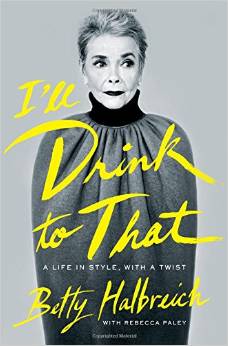 Some people take longer than others to grow up. By that, I mean to become capable of taking care of themselves as an adult without relying on parents or others for emotional or financial security. In her recently released autobiography, “I’ll Drink to That: A Life in Style, with a Twist” Betty Halbreicht was such a person. Born as the only child of an affluent Chicago couple, Halbreicht had it all â€” looks, money and connections. She grew up in a home with domestic help and a generous allotment of fashionable clothes, pampered resort vacations and privileges not available to most people. On vacation with her parents she is accosted by the handsome son of the owner of the hotel where they were staying. The Halbreichts were a wealthy New York family with many lucrative business interests and her marriage to twenty-seven-year-old Sonny Halbreicht while she was only nineteen marked the beginning of a new phase of her self-centred, pampered lifestyle.

After quickly producing the requisite daughter and son, the marriage began to unravel. Excessive drinking and infidelities on the part of both Betty and her husband resulted in them separating by the time her children were ready for college. In her early forties Betty was forced to grow up and fend for herself. That meant getting her first job, opening her first bank account, paying bills and living life on her own. Fortunately her earlier connections came in handy when she was hired by a series of carriage trade fashion retailers to help coordinate and sell their merchandise. All those years of being a clothes horse paid off when she was appointed as the first personal shopper for Bergdorf Goodman in New York City. Halbreicht was now catering to the ladies who used to be her friends. Her unique style and impeccable taste served her well as she advised New York socialites, movie stars, stylists and powerful business women including Joan Rivers, Estee Lauder, Candice Bergman and Betty Ford. Her tiny office became a haven of therapy for those whose wants were often compensation for their empty lives and unfulfilled emotional needs.

Betty Halbreicht’s book is a reflection on a life lived. When I first began reading it I became impatient and perhaps if I were completely honest a bit envious of the descriptions of her entitled lifestyle. The further into the book I got, the more I liked her and by the time I finished I felt we were BFFs. At eight-six she still goes to work at Bergdorf Goodman every day and like many of us she laments today’s lack of manners, appreciation for quality and the virtues of hard work. Her job was and is not easy as she caters to the whims and demands of clients with little time, less empathy and unbreakable ties to their cell phones. Like any business woman, particularly one with many years of experience behind her, she has learned life’s valuable lessons by living them. I’m glad she shared. 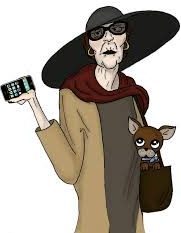 It was a fast read and worth it. Thanks for your comment. Â Lynda Davis Follow my blog at: http://www.boomerbroadcast.net Social commentary on life from a Boomer Broad’s perspective e-mail: lyndadavis1@yahoo.ca