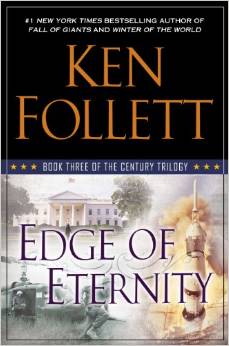 In case you’ve been wondering why I haven’t posted any book reviews lately it’s because I’ve been ploughing through Edge of Eternity, the third book in Ken Follett’s Century trilogy. There’s nothing I love better than a great big fat book but at eleven hundred pages this one took some time. Follett’s epic fictionalized accounts of real life events are always educational, entertaining, tantalizing and engrossing.

The first book, Fall of Giants was, I thought, the best. Covering world events from the beginning of the twentieth century to about 1925, we are introduced to approximately one hundred and seventy-four characters all of whom are fascinating and relevant. Winter of the World takes us from 1925 until the beginning of the Cold War and this last installment, Edge of Eternity covers world events from construction of the Berlin Wall in 1961 to its fall in 1987.

Reading about the race riots in Birmingham, Alabama in the sixties, the escalating Cold War, the assassination of President Kennedy, the Bay of Pigs debacle, Russian dissidents covertly releasing books describing life in Siberian gulags and other historical events fictionally recreated in the pages of this book was a trip down memory lane. Boomers will clearly remember the black and white pictures of race riots on the front pages of newspapers and the sanitized scenes of the Vietnam war that appeared on our television screens every evening. These events will all be recalled as part of lives our growing up. Some of the dialogue was a bit corny this time and the placing of characters a tad contrived, but that’s the nature of fiction.

Because I read all three books over a period of about three years, it was hard to keep track of the characters, particularly by the time I got to Edge of Eternity. At first I found myself scratching my head searching for the details and course of events that made the earlier characters so fascinating. Follett helps the reader somewhat by providing brief backgrounds but I found the earlier characters much more interesting, perhaps because I’m a fan of the earlier history. I plan to re-read Fall of Giants again some time as it was my favourite of the three.

What struck me most as I wrapped up this reading marathon was how little our world leaders have learned as a result of their twentieth century mistakes. Thanks to Comrade Putin, Russia is regressing to Cold War status. The current racial tension in Ferguson, Missouri and its ripple effect is tragically similar to events in Birmingham, Alabama in the sixties. Sadly, this time there is no Dr. Martin Luther King to calm the protests. And the bad guys are still engaged in pissing contests. Perhaps they should all take a break and read the century trilogy. We’re supposed to learn from our past mistakes.

Order your copy of BOOMERBROADcast, the book: www.amazon.com

I am now reading Fall of Giants, plan to get through the trilogy, sometime!