Remember the days when gifts were considered something special, not obligatory? Fortunately, the older I get, the fewer gifts I have to buy. And, that’s not because everyone my age has croaked already, but we’ve become smarter. We have finally acknowledged that we have enough, more than enough and we don’t want any more ‘stuff’. And we’re spreading the word.

Baby boomers have accumulated one helluva lot of crap over the years. Growing up in the 50s and 60s, we were not as affluent as families are today. Back then, we would pore over the annual Christmas Wish Books from Eaton’s and Simpson’s (in Canada), circling all the wonderful toys we hoped Santa would leave under our Christmas trees.

Instead of iPads, X-Boxes, iPhones and other expensive toys that would cost the equivalent of a week’s salary for many people, we would open our gifts to find new snow-flake printed flannel pyjamas or new matching mittens and earmuffs. Sure, our parents/Santa gifted us new skates or toboggans but he certainly didn’t lavish us with the excess enjoyed by today’s generations.

When we were kids, my brother and I would pool the coins we’d saved from our weekly allowance and go shopping together at the local five-and-dime store the week before Christmas to buy gifts we could afford for our family. Mum would get a single little juice glass with a rooster on it. Remember those tiny bottles of Evening In Paris cologne? I wonder why she never wore it? Dad would be the lucky recipient of a pocket comb or a single hankie. Nowadays, parents slip the kids a few hundred bucks and drop them off at the mall to do their shopping.

After all, our parents (The Greatest Generation) grew up during The Depression. I remember my father telling me that one year in particular each of the seven kids in his family received a single orange for Christmas. Trying running that one by kids today.

We were raised to be thankful for our new pyjamas, colouring books and crayons. We kept our expectations modest and we were thrilled with whatever we found under the tree. After all, Christmas and birthdays were the only times during the year we got presents.

One of the best parts of the holiday season, when we were kids, was the experience. The house smelled like fresh spruce or pine from our real trees decorated with paper chains and homemade ornaments we created in art class at school. Christmas cards were strung along walls and across ceilings.

There were Christmas parties and concerts at the church, the Legion Hall, the Masonic Temple and, of course, back in those pre-PC days, at school. Those parties always included a jolly Santa wearing lots of rouge, a cellophane gift bag of cheap Christmas candy and a sing-along where we belted out old favourites like Jingle Bells, Rudolph The Red-Nosed Reindeer, and Here Comes Santa Claus.

We loved those modest parties where the entertainment usually consisted of the moderately talented among us twirling batons, tap-dancing, or playing a tuneless version of a Christmas carol on the piano. Then, we celebrated the big day with hordes of aunts, uncles, cousins, and grandparents over an over-cooked turkey in a relative’s dining room. It was truly magical.

When boomers grew up and started fashioning our own Christmas traditions, our improved economic status accelerated our consumerism. We bought more gifts for more people, costing more money that caused major trauma when we got our Visa bills in January. Our Christmas shopping lists grew to onerous proportions, to the point Christmas gifting became a chore instead of a joy.

What does the future hold for gift-giving?

Fast forward to 2021. We’re in our sixties and seventies now. We’re trying to offload some of the crap we’ve accumulated over the years and many of us are actively discouraging the giving and receiving of gifts. As my parents aged, shopping became difficult for my mother. Not only was the trip to the mall exhausting and often frustrating, she rarely knew what to buy for my dad, my brother or my husband and me.

The obvious solution was to lift the burden of shopping in December and call a halt to the exchange of gifts. My family was totally on board and friends soon jumped on the bandwagon too. It was incredibly easy and did not in any way diminish our enjoyment of getting together and celebrating the season. It worked so well we stopped giving gifts for birthdays too.

My approach to holiday gift-giving may seem harsh to many people, and not everyone is as willing or accepting of such a drastic approach, but I love it. I never have to prowl an overheated, crowded mall for a gift that I’m never sure will even be wanted much less appreciated. No gifts, no pressure, no seasonal stress.

I will admit, however, that grandchildren always present a challenge though. We want them to know we’re thinking about them and love them (even though we can never spend Christmases with them as they’re scattered all over the continent), so we make adjustments. Christmas is still magical for the little ones. The older ones rotate off the payroll once they finish university and are working. The younger ones get a cheque sent to “Santa” who takes care of what they want or need.

Most of my friends do not exchange gifts with spouses and that seems to be working well. Neither my husband nor I have any luck buying clothes for each other, so we default to something small and hopefully thoughtful. Even that rarely works and we should probably forget it altogether too.

A recent letter to Dear Abby from Dumbfounded in Florida expressed chagrin that a presumptuous sister-in-law had emailed her an unsolicited list of suggested Christmas gifts with online links for ordering gifts for nieces and nephews. While the relative no doubt thought she was being helpful, Abby confirmed that it was poor etiquette and presumptuous. I agree. Especially, when you can be pretty sure those nieces and nephews are likely so jaded they probably won’t even take the time to drop a note of thanks to their aunt for her generosity. 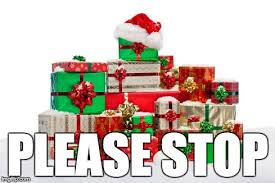 There are so many benefits to my approach to gift-giving, not the least of which is I no longer have a coronary when I get my Visa bill in January. I’m relaxed, unburdened and content with my choice to forego consumerism at Christmas. My point is when giving and receiving gifts is no longer a joy and becomes a burden, then it’s time to reevaluate the practice.

Of course, there’s always the option of giving to a worthy cause in the name of our friends and family. How about a goat for a family in India or making a donation to a charity or the local children’s hospital. Well-intentioned as this may be, it generally goes over like a lead balloon. 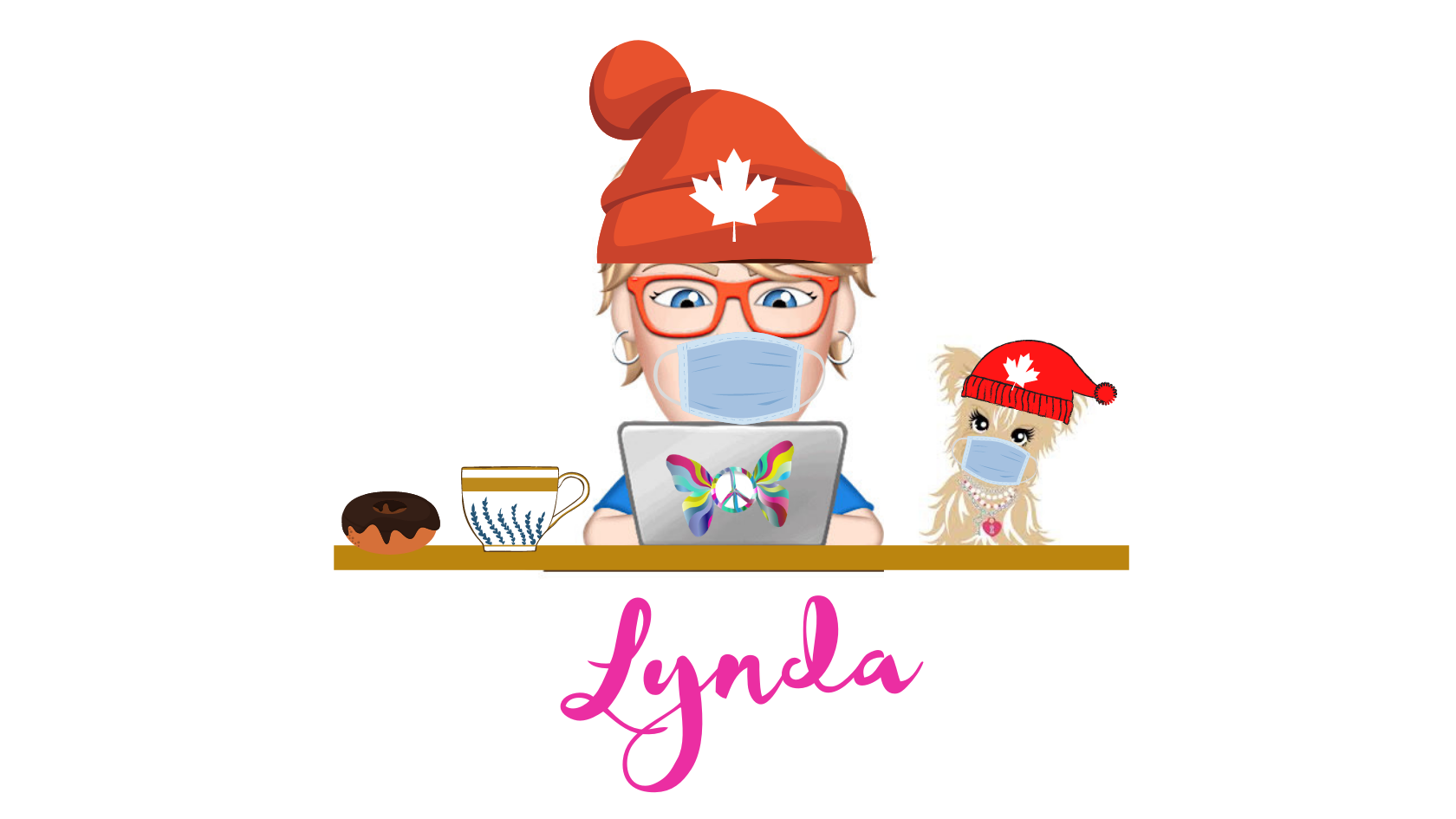 Lynda, I have such fond memories of Christmas growing up. My dad was really the one who made it special. Not necessarily with extravagant spending but making sure it was a magical time. We did get oranges in our stockings, but we also loved everything about the day.
My little original family of 5 has grown to 26, and there is no gift giving. We get together,eat, laugh, toast the ones we have lost and treasure the new memories we make!

With a family of 26 I’m not surprised you decided to forego gift-giving. Glad I’m not alone. Thanks, Deb.

The anticipation and mystery of a wrapped present still holds excitement for me with no price tag attached. I’ve given up trying to guess what people close to me want and just give something from the heart. If it gets regifted or unappreciated, so be it. This season is still magical to me…. I love the sparkle & glitter of Christmas lights, the singing of traditional Christmas songs, church bells ringing on Christmas Eve, gifting to the less fortunate and gathering of friends & family. The memories of Christmases past flood me as we decorate our Christmas tree with some… Read more »

We all aspire to your kind of Christmas. Thanks, Gail.