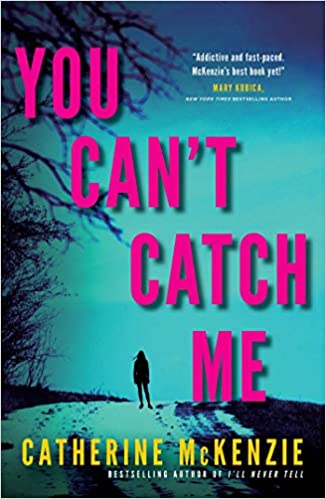 Identity theft is a particularly devastating kind of fraud and deception. It can take years to sort out one’s affairs after someone taps into your personal data and takes over your life. You Can’t Catch Me by Catherine McKenzie is the fictional account of such a crime. It hit home with me because a couple of years ago I had my wallet stolen from my purse as it sat on the floor at my feet while I was having a cup of tea with a friend in Panera Bread.  A few months earlier, I had made the wise decision to separate my credit cards, drivers’ license, and other important documents into a separate zippered compartment in my purse, so when my wallet was stolen all the thief got was some cash and vouchers—and not my identity and valuable cards. That saved my bacon and I’ve been vigilant ever since.

The main character in this novel, Jessica Williams was disadvantaged by being given a relatively common name when she was born. I suppose it could have been worse if she’d been named Mary Smith or something even more commonplace, but sharing a name like Jessica Williams with countless other people has its disadvantages. If you’ve ever had a credit check done or applied for a mortgage and you have a common name, you can imagine the problems that can create. I’ve been delayed at border crossings because there’s an arrest warrant out for another L. Davis somewhere and the authorities have to make sure I’m not the bad guy.

Anyway, Jessica Williams #1 is surprised when she orders a drink at the airport to discover the woman sitting next to her is also called Jessica Williams. What are the chances? When they start comparing notes, it seems they also share a birthday. A “can you believe it” conversation takes place which results in the two Jessica’s swapping phone numbers on their mobiles before Jessica #1 leaves to catch her flight to Puerto Vallarta. She’s taking a vacation with some of the severance money she got when she was fired from her job as a journalist. At least her settlement left her with a substantial six-figure nest-egg which will cover her living expenses until she can rebuild her career.

When she returns from her week in the sun, Jessica #1 goes to the bank machine to get some cash and finds her substantial account has been cleaned out. The bank is not particularly helpful but they do provide her with a security photo of the person who used her identity at a bank machine. When she reports the theft to the police, they are equally discouraging about ever finding the perpetrator. They take down her information with the understanding that she’s S.O.L.

Jessica #1 was raised by hippie parents in an upstate New York commune run by a charlatan called Todd. He called his community Land of Todd, LOT. She was able to escape with the help of an outsider just before her eighteenth birthday when she was promised to be married to Todd. Liam, her rescuer, had also sprung his cousin and others at different times in the past. Liam helped Jessica reintegrate into society. She then studied and passed her G.E.D.’s and managed to earn a degree in journalism at a New York University.

Knowing that the bank and the police probably weren’t going to find Jessica #2 who stole her money, she starts sleuthing on her own in hopes she can find the thief and reclaim her money. Her investigations uncover other Jessica Williams’s who have been conned in much the same way by the same person. They unite to track down the woman who stole their identities and uncover even more surprising coincidences. How dangerous is this woman? Will she kill? How far will she go to throw them off the scent?

Their investigation takes them on a road trip around upper New York state where they hatch a complicated scheme designed to entrap Jessica #2. But, who’s the hunter and who is the prey? Many times as I was reading the book I found myself questioning their tactics. Why did she do that? What were they thinking? The author keeps us engaged and racing ahead to find out what happens. It’s well-paced and includes some fun surprises.

If you decide to read this book, which I thoroughly enjoyed, I’d suggest you follow it up by watching a really fun movie called Identity Thief starring Melissa McCarthy and Jason Bateman. That’s the movie that made me fall in love with Jason Bateman—no one wears blue jeans better than he does—and Melissa McCarthy is hilarious in this movie. Just a fun change of pace on the same topic. It’s another reminder of how vulnerable we all are.

When I finished the book and started reading the notes About The Author at the end of the book, I was delighted to learn that Catherine McKenzie is the author of ten novels but significantly she’s also Canadian. I love to read and support Canadian authors. McKenzie graduated from McGill University and practises law in Montreal, Canada. What a bonus!

If you cannot get You Can’t Catch Me by Catherine McKenzie at your local library or bookstore, you can order it from Amazon by clicking on the image of the book. It’s only $14.85 Cdn delivered to your home if you have Prime.

Disclosure: If you order from this link I may receive a teeny, tiny commission. Thanks for your support.