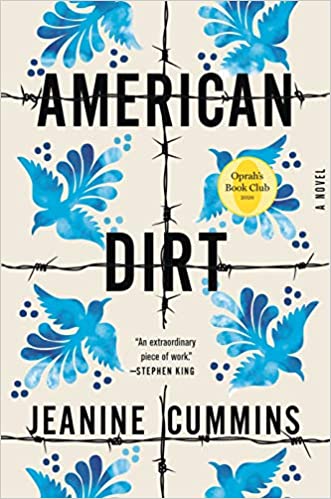 Jeanine Cummins, author of the best-selling novel American Dirt has been roundly criticized for writing a book about a politically sensitive subject she wasn’t born into. The cultural appropriation accusation is frequently hurled at authors and it’s a nasty term. American Dirt is the story of a Mexican woman and her eight-year-old son who are fleeing the wrath of a cartel in Mexico by trying to illegally cross the border into Arizona. Cummins is not Mexican and she has not personally lived the experience. I really have little patience with this kind of criticism. Would these same people criticize Shakespeare for writing Hamlet because he wasn’t Danish? Or Tolstoy for writing Anna Karenina because he wasn’t a woman? Ignore the critics.

American Dirt is a gripping story right from page one. Lidya is the owner of a small bookstore in Acapulco and mother to eight-year-old Luca. Her husband, Sebastián, is a journalist who has written a newspaper exposé about Javier, the ruthless leader of a local cartel. Retaliation for her husband’s article comes in the form of mass murder. Sixteen members of Lidya’s family are executed, including her husband at a family birthday party in her backyard. Lidya and her son Luca only escape the massacre because she has taken her son to the bathroom and they were able to hide when she hears the gunfire outside the window.

The police cannot be counted on to bring the criminals to justice because they’re also on the cartel’s payroll and fear for their own lives. So, Lidya and Luca have no choice but to literally run for their lives and see if they can escape to the United States. She has a cousin in Denver and she hopes that will put them out of the reach of the cartel. Within hours of the murder of her family, Lidya and Luca begin the process of escaping and hiding their tracks. The cartel has wide-ranging connections. Their pictures are immediately broadcast via cellphones to alert their vast network. Bus drivers, shopkeepers, police, and everyone on the street could be a potential betrayer who would benefit from returning them to the cartel for punishment.

Lidya can leave no traces of her escape route, which means buying tickets on conventional transit such as trains, buses or airplanes is out of the question. She can’t even use her cellphone for fear of GPS pinning down her location. With only a few items of clothing and personal belongings in a backpack, they decide to follow the established migrant route to freedom by riding the tops of freight trains north to the border. It’s a dangerous and risky undertaking. They’ll be exposed to thieves and rapists but they’ll also experience many gestures of unexpected kindness and assistance along the way. Much like the underground railroad that transported escaped slaves from the United States to Canada, the migrants have an established network of shelters to assist them in their journey.

Along the way, Lidya befriends two teenaged Guatemalan sisters who are also escaping horrific violence. The four journey through a series of threats from within and outside the group of migrants. The sisters have previously paid a coyote (human smuggler) to direct them across the border where they hope to apply for refugee status in the United States. They are vulnerable and constantly on the lookout for betrayal or further violence. For Lidya “The question is immaterial anyway. Her survival is a matter of instinct rather than desire” because of her son.

Some of the criticism directed at the author of this book relates to her use of colloquial language and other nit-picky points of accuracy. It must be remembered that this is a book of fiction and Cummins can be forgiven for any inaccuracies because the story itself is so moving. Canadians do not share the American horror of immigration as we are a country built on the hard work and contributions of our immigrant population. After all, our families were all immigrants at one time. In her own defense, the author writes in her notes at the end: “If you’re a person who has the capacity to be a bridge, why not be a bridge?”

This story is an absolute must-read. Once I started I could not put it down. American Dirt gave me a much better understanding of the fragility of life for innocent people living in Central American countries and reinforced the stupidity and inhumanity of building a wall between Mexico and the United States. Most (not all) of these people are honest, hard-working families simply seeking an escape from brutality and violence. In the words of a padre who manages one of the shelters along the way, “This path is only for people who have no choice, no other option, only violence and misery behind you.” The migrants escape with next to nothing in hopes of building a better life for their children. I highly recommend reading this book. While the subject matter is difficult, it’s uplifting and informative.

If American Dirt by Jeanine Cummins is not available at your local library or bookshop, you can order it for only $13.89 Cdn from Amazon by clicking on this image of the book. Disclosure: If you order from this link you receive Amazon’s best price and I may receive a teeny, tiny commission. Thanks for your support. Privileged people who lack compassion for those less fortunate drive me absolutely crazy…. especially when they call themselves Christians!

Couldn’t have said it better! Thanks, Gail.