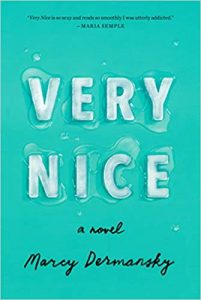 The only likable character in Very Nice by Marcy Dermansky is an apricot standard poodle called Princess, a.k.a. Posey. But that doesn’t mean the book is not a fun read. On the contrary. Like the characters on Seinfeld, the various characters with all their flaws are colorful, individual and even understandable. When I first started reading, I wasn’t sure if the book was a love story, a character study, a mystery, a comedy or a sex romp. Actually, it’s all of these. Each chapter is written in the first person, narrated by one of the six main characters, connected by one degree of separation, which is rather convenient.

Rachel is a student of Zahid, her creative writing professor. Naturally, she has a crush on him and at the end of term, they engage in an inappropriate liaison that she reads too much into and he regrets. Zahid is a beautiful thirty-six-year-old man-child whose contract with the university is finished, so he sublets his New York apartment to Khloe, the twin sister of his friend Kristi, when he has to travel back to Pakistan to visit his dying grandmother. But he has to find a home for his standard poodle while he’s gone, so Rachel agrees to take care of it when she returns home to her privileged family home in Connecticut for the summer. But her parents, Becca and Jonathan have just separated. Jonathan is experiencing his mid-life crisis and moved into town to live with his much-younger pilot girlfriend whose name isâ€”what elseâ€”Mandy. Yes. She was named after the Barry Manilow song.

Things start to get complicated when Zahid returns to New York early from Pakistan, just ten days after his departure. Naturally, Khloe refuses to move out of his apartment and she does not want him sleeping on her couch. So he goes to visit Rachel at her mother Becca’s fancy home in Connecticut in search of his dog and hoping to find somewhere to couch-surf for the remainder of the summer. His plan works. But, he gets it on with the lovely Becca which leaves Rachel feeling hurt and left out. Meanwhile, ex-hubby Jonathan isn’t living happily ever after with Mandy, and Khloe and Kristi, despite being twins, are not always compatible. Khloe works in high finance for Rachel’s father, Jonathan. She’s also a lesbian who’s trying to land the affections of her childhood babysitter, Jane. But Jane’s in love with Winnie, who also has a boyfriend. Are you following all this?

Will Zahid pick Rachel or Becca? Or someone else altogether? Will Jonathan and Becca reconcile? Will Khloe find true love? Fortunately, all this intrigue could only happen in a fictional novel, which is why it’s such a delicious and fast read. So, settle into your LaZgirl chair with a glass of wine or a nice cup of tea and enjoy some escapism. It’s not a literary masterpiece but it is a fun ride. I’d rate it 7 out of 10.

Another one to add to my ever growing list!