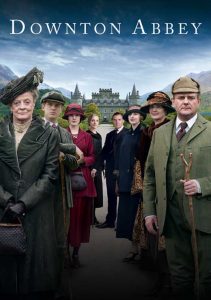 For anyone who needs a break from the endless, soul-crushing media frenzy about Justin Trudeau’s brownface debacle (and who doesn’t need a break from that!), I highly recommend going to see Downton Abbey, the movie. This high camp costume drama set in the mid-1920s is just what we needed to relieve the never-ending onslaught of nasty, boring pre-election press. My boomer gal pals and I planned well ahead of time to be there on the opening day of the movie on Friday, September 20th. We grabbed a quick lunch at a nearby Greek eatery, then caught the 1:00 p.m. showing.

We’re happy to report it was just as much fun as the television series. The theatre was full of women like us (retired boomers), with a couple of dutiful men sitting in the audience. A couple of the women in the audience were wearing fascinators, which is actually more of a 21st-century accessory thanks to the Duchess of Cambridge, rather than the mid-1920s. Tiaras would have much more appropriate, but we commend their good intentions and forgive their little anachronism. As any Downton fan already knows from all the previews, the Granthams were honoured with a visit by King George V and Queen Mary. That meant plenty of activity above and below stairs, including hauling Carson out of retirement to help out.

The plot was deliciously corny but the entire movie fed our appetites for escapism and fantasy so we weren’t disappointed. We loved every minute of it. Members of the royal entourage accompanying the king and queen were pushy, arrogant and insulting, so they needed some comeuppance by Mrs. Patmore and the rest of the Downton staff to bring them into line. The Downton staff under the unlikely leadership of Anna Bates (played by Joanne Froggatt) engaged in some downstairs espionage and covert skullduggery to ensure the Downton staff alone had the once-in-a-lifetime opportunity to personally serve the king and queen.

Mr. Barrow was caught in an embarrassing and at the time illegal indiscretion. A new relative, Lady Bagshaw (played by Carson/Jim Carter’s real-life wife, Imelda Staunton), was introduced as a cousin of the indomitable Dowager Countess of Grantham, Violet Crawley. Lady Bagshaw as lady-in-waiting to Queen Mary (played by Geraldine James) added a new family secret to the Crawley family tree. Lady Mary ruled with her usual flawless, regal hauteur. The best and funniest lines were of course delivered by Maggie Smith as Violet Crawley with some humourous surprises from Mr. Mosley. The next generation of Crawley kidlets scampered about like proper little silent stage props in period costume, behaving in an appropriate upper-class manner. Tom Branson asserts his new status in the Grantham hierarchy and perhaps acquires a new love interest. Lady Mary confirms her current role as heir-apparent but is someone else secretly waiting in the wings to usurp her position? Will Robert Crawley, the Earl of Grantham ever figure out what’s going on in his complicated family? 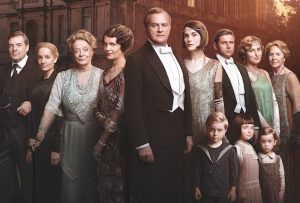 Downton Abbey the movie was great fun. Seeing it play out on the big screen (certainly bigger than our big screens at home) made for a more inclusive viewing experience. Seeing the library, the dining room, the grand entrance hall and the grounds of Downton displayed on a giant screen gave us the opportunity to zero in on more of the wonderful details and decor of the home.Â  For those of us who will never be able to afford a personal visit to Highclere Castle, the real setting for Downton Abbey, it was a special treat. The costumes, particularly the dresses are obviously to die for. There must have been a massive run on sequins, tulle, tiaras, and silk to prepare for the royal visit.

Fans of Downton Abbey absolutely must see the movie. There was actually one member of our group who (shockingly!) had not watched the television series and now has a lot of on-demand catching-up to do. There were plenty of little plots and subplots to keep us engaged. Interestingly, many of the characters in the movie now have open-ended lead-ins for future stories. Will there be another movie? Another television series? Stay tuned dahlings.

Sounds delicious! Thanks. Will search for my tiara to wear. Probably a bit tarnished by now so will have to polish it up. Love Imelda Stanton. So happy to hear sheâ€™s in the movie version.

Can’t wait to see it and get a much needed break from this black face controversy.

Thanks for the review I’m seeing it at 3.30 today!