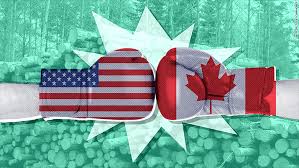 When Donald Trump expressed interest in buying Greenland, it was suggested that Denmark buy the United States in order to finally provide Americans with decent universal health care and an improved education system. TouchÃ©. That got me thinking about how much more practical it would be for Canada to take over the United States.

And the list goes on. There are so many reasons why Americans would be better off being Canadian. Contrary to what Americans are constantly told, they are not living in the best country in the world. Many, many surveys, polls and studies have determined that Canada is currently the best country in the world to live in, but most Americans aren’t exposed to international news on their regular networks so how would they know that. Last year it was Denmark with the United States consistently much further down the list.

That’s not to say we don’t love our American cousins and friends. We do, very much. If you’ve ever doubted this, go seeÂ  COME FROM AWAY at the theatre (which we just did) and you’ll be forever reassured. It’s the true story of 7,000 airline passengers being forced to land in Gander, Newfoundland in the wake of 911, doubling their population in a few hours. In fact, take your President to show him that generosity and kindness are far more effective in building relationships than tariffs. Although it might be tempting to annex the United States and show them the light, I think we’ll just remain very modestly Canadian and keep our heads down, our eyes on the road and our sticks on the ice. It’s our wonderful little secret . . . and it’s not our nature to brag.

We in the United States could certainly learn from Canadians it’s a pity we are so close and yet so different great idea though.

Appreciate your comments, Paul. We love our American friends and hope things get sorted out for you soon.