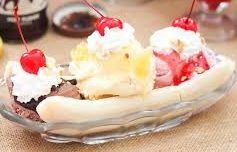 As soon as that container of French Vanilla ice-cream in my freezer is gone, I’m going to quit. This time for sure. It’s the last remains of some flavours I stocked up on when we had company a couple of weeks ago. Understandable, right? I bought the French Vanilla to serve with fresh Ontario strawberries which have a life expectancy of only 24 hours, but the Black Jack Cherry, Heavenly Hash, Pralines n’Cream, Rocky Road, and Maple Walnut are just plain inexcusable examples of my character weakness. It reveals a clear and undeniable propensity for addictive substances but this time I’m truly committed to reforming my ways.

Ordinarily, I try not to buy ice-cream because I’ve been known to stand at the kitchen counter eating it directly out of the container until I feel sick. It’s safest to not even have it in the house. But, like any alcoholic or addict, it’s a slippery slope once you submit to temptation. I love ice cream. It’s a genetic mutation inherited from my mother and her mother, my grandmother. It can’t be helped so all I can do is try to manage it. Often, when I’d drop into Long’s Restaurant for my after-school cherry Coke fix as a teenager, there would be my grandmother sitting in a nearby booth enjoying her ice cream in a cone-shaped stainless steel dish with a paper liner, before she began her mile-long walk home. You see, it’s not my fault.

Then, today I found myself trying to find Spanish redskin peanuts at the grocery store to go with that boring vanilla ice-cream. They’re the only kind of peanuts suitable for making a tin roof sundae, which is a chocolate sundae made with real chocolate syrup (notÂ hot fudge), and only those special redskin peanuts on top will do. I can’t find Spanish redskins anywhere, although they do have them at Dairy Queen because I regularly get them in my Blizzards.

All those ice-cream parlour treats boomers grew up enjoying in the fifties and sixties are going the way of rotary phones. Does the younger generation even know what a real ‘soda’ is these days? It’s not a bottle or can of pop. The Americans generically refer to all soft drinks as soda. A genuine ice-cream soda is like a ‘float’ (another anachronism) with a large scoop of vanilla ice-cream over a shot of flavoured sundae syrup topped off and mixed with soda water, whipped cream and a maraschino cherry. It’s consumed with both a straw and a long-handled spoon.

I’ve heard that most of the machine-made milkshakes we are served these days aren’t even made with real milk but are an edible oil product or a concoction made with dry milk solids, whatever that means.Â RealÂ milkshakes are made with ice-cold whole milk, a generous squirt of flavour syrup and a couple of scoops of vanilla ice-cream, whipped in a green Hamilton Beach dedicated milkshake maker. Chocolate milkshakes are notÂ made with chocolate ice-cream but with vanilla ice-cream and real chocolate syrup. Having worked in a hamburger place for three years in high school, I’m an expert on these things. I still remember the short-form codes we wrote on our order slips: CMS = chocolate milkshake; BMS = butterscotch milkshake, and so on. For an extra five cents, we’d throw in a fresh egg and whip it up in the milkshake too.

Considering my past history in the biz and my own predilection for ice-cream, you would assume I’m pretty particular about which brands I consume. Sadly, I’m not, although I do prefer thoroughly Canadian private brands like Chapmans and Kawartha Dairy. It’s so hard to know what crap goes into our food sources these days with all the preservatives, stabilizers and thickeners, so I try to read labels and be somewhat discriminating. On the other hand, I regularly go to McDonald’s drive-thru to order their ice-cream cones which cost only $1.40 and leave an unpleasant aftertaste. I like them even better than Dairy Queen which costs four times as much. What the hellâ€”I’m an addict and sometimes we just take whatever we can get our hands on when we’re dying for a fix. I’m just an ice-cream slut.

Today, as I was checking out at the grocery store, I noticed the guy in the lineup behind me had a box of HÃ¤agen-Dazs ice-cream bars in his cart. I offered to take them off his hands if he didn’t feel he could carry them home. When he told me his wife wouldn’t approve, I was horrified to realize that he must have thought I was trying to pick him up and he was letting me know he was taken. That’s how low we addicts will go to get our fix. We have no shame.

There probably isn’t a 12-step program that I can take to break the cycle. Even as I’ve pledged to buy no more ice-cream, I find myself thinking, “but it’s only August”. My sick mind is reliving the satisfying crunch of those walnuts in Kawartha Dairy’s special blend of maple ice-cream. And as much as I love Chapman’s Black Jack Cherry frozen yoghurt, I always feel sick after pigging out on it. Even with the overriding threat of a stomach ache and the undeniable reality of the extra five pounds already registered on my bathroom scale, I can’t say no.

Don’t even get me started on gelato. A few years ago when we were in Italy I was overjoyed to see counters with gelato of every flavour that stretched forever. The shopkeepers are still talking about that weird Canadian lady who consumed so much gelato I nearly paid off their national debt.

Then, there’s the issue of company coming on Labour Day weekend. It includes two grandsons (20 and 22 years old) who enjoy and would probably expect me to have ice-cream on hand. I’m thinking Rocky Road and Heavenly Hash for starters but who doesn’t enjoy Black Jack Cherry? Maybe I should up my efforts to those find Spanish redskin peanuts and I should probably pick up a bottle of chocolate syrup, just in case. Labour Day weekend is usually hot and it’s also my birthday, a special occasion which absolutely calls for a sweet treat. Like I said . . . no strength of character. I can already feel my waistline growing and my arteries hardening. Did I mention it’s my birthday that weekend? And you can’t have a birthday without ice-cream . . . right? What’s your favourite flavour? I should probably get some in, just in case you pop by.

[…] described my ice-cream bingeing in an earlier post (click here for I’m on the Rocky Road to death by ice-cream) and had to put a halt to that. I would stand at the kitchen counter eating it directly out of the […]

I too love ice cream but reserve its purchase for special occasions. As far as red skinned peanuts go, Picards Peanuts has them. I know, I am not helping . . .

Floats growing up was a regular in my house. Orange, root beer, you name it, but my all time favorite treat was a trip to Peerless Ice Cream Shop ( in Tecumseh Ont) for a hot toffee sundae. Real melted toffee and peanuts on top of vanilla ice cream.
These days I rarely eat ice cream but I love butter pecan which is going by way of the dinosaur.
But, what memories you have left me with!

For sure some of the old flavours are no longer being made. They don’t carry Maple Walnut at Superstore. I can get it from Kawartha Dairy at an independent store and you might find Butter Pecan there too. Thanks, Deb.

I feel as though I have met a kindred spirit! There is nothing I love better than ice cream and I, too, have found it’s better not to have it in the house. I never have very much at one sitting, and can be satisfied with a one-half cup serving, but will have one every night until the pint is gone. And I say pint because only the highest quality product will do, and most only come in pints. Mint chocolate chip (must be white), Vanilla, anything Mocha or Coffee flavored, Pistachio, Ginger, Grapenut, and any of the Berry flavors.

You’re a whole lot more disciplined than I am. I can eat a pint in one gulp!! Thanks for your comments, Adele and happy dishing.