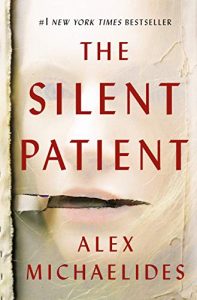 Murder-mystery-thrillers are not my usual choice for reading material. But, after reading The New York Times best-seller The Silent PatientÂ by Alex Michaelides, I’m thinking perhaps I should expand my horizons. I stayed up until after midnight last night to find out “whodunnit”, then couldn’t sleep thinking about all the plot twists. It’s a psychological thriller written mostly in the first-person voice of a psychologist so if you’re a fan of pop psychology then you’ll love all the references to mental illness.

Alicia Berenson is a temperamental artist with a troubled past who kills her husband Gabriel by shooting him in the face several times. Her actions seem incongruent with her obvious love and adoration of him. Why would she do such a thing? All the evidence points to her as the killer but did she really do it? Immediately after the crime is committed, Alicia goes silent, never speaking, even to defend herself in the much-publicized trial that follows. Her silence lands her in a mental institution instead of prison and for years she endures many attempts at reaching inside her psyche to determine the chain of events that led to the murder but she remains steadfastly silent. Several violent attacks on others by Alicia while institutionalized seem to confirm her darker side.

Theo Faber is a psychologist with a troubled childhood similar to Alicia’s. He has struggled with his own demons to rise above his abusive childhood and become a healer himself. Because of his own journey, Theo thinks he is uniquely qualified to unlock her secrets. Much of the narrative is written by Theo with intermittent extractions from Alicia’s diary before the murder. There are many characters in the story who have the potential and personality profile to harm someone and frame Alicia for the crime. Just when I think I’ve picked the right one with the appropriate motive, we’re introduced to another character who is similarly culpable. 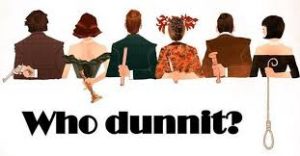 Did Alicia really shoot her husband? Or was it her husband’s brother Max, a disagreeable bully and a lawyer who inherited Gabriel’s estate. Or was it Alicia’s mean, aggressive aunt who hated her. Perhaps it was her unfortunate cousin, son of the mean aunt who knew all her childhood secrets? Was it Alicia’s jealous business partner Jean-Felix with whom she was in the process of ending their relationship. Theo is committed to getting to the source of Alicia’s mental illness and setting the record straight on who was the true murderer.

The storyline and the writing are captivating. It’s a definite page-turner and Michaelides’s manipulation of the reader is masterful. We’re taken on a thrilling roller coaster ride with a surprise splash-down at the end. Yep! I definitely need to step outside my world of reading so much historical fiction and get into some fun whodunnit’s. Even if you’re not a fan of the genre, give this one a try. I’m pretty sure you’ll be as gobsmacked as I was. I’d rate The Silent Patient 9 out of 10.

To order a copy of THE SILENT PATIENT from Amazon, click here.

Thanks for the ‘Silent Patient’ review, Lynda.
I LOVE good mysteries.

Let me know what you think. Thanks J.

I love this type of book, so thank you the recommendation. Now added to my very long list of books to read!

Hope you enjoy it as much as I did – and I did!