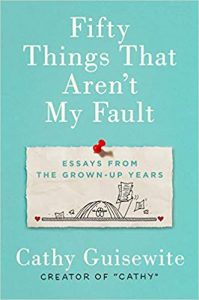 There isn’t a boomer gal alive who hasn’t at one time clipped aÂ Cathy cartoon out of the daily newspaper and attached it to her fridge, tacked it to her bulletin board at work, or sent it to a friend. We were devastated when she ‘retired’ from her daily comic strip a few years ago but she’s back in the saddle with a new book that picks up where she left off. Fifty Things That Aren’t My Fault by Cathy Guisewite is like reading her famous comic strip in narrative styleâ€”fifty scenarios written out in essay formâ€”which is interesting and fun to read. Despite her high profile for more than thirty years of drawing her comic strips, I really knew very little about her personal life and this book provided some valuable back story.

Cathy Guisewite was born in 1950 in Dayton, Ohio. With two sisters, a stay-at-home mother and a father in the advertising business, she was the stereotypical baby boomer. By the time she finished college and started working for an ad agency, she had become part of a massive swell of young boomer women who were faced with challenges and opportunities unknown and not experienced by previous generations. Baby boomer women could now supposedly achieve business success while marrying and raising children. None of these life stages had been experienced in quite the same way before and we weren’t always successful in negotiating the career, dating, marriage and motherhood scenes. Cathy quickly picked up on these conflicts and brilliantly began detailing the challenges faced by our generation in a little cartoon that was soon syndicated by newspapers around the world.

As I was reading each of the fifty essays, I found myself imaging how she would have drawn them. Each one was worth several cartoon strips alone so it was like reading more than a year’s worth ofÂ CathyÂ cartoons in my imagination. What I hadn’t realized is that the real Cathy didn’t marry until she was forty-seven and by then she was already the mother of an adopted daughter to whom she is devoted and who is a major source of new material for the book. That knowledge had me reflecting on the struggles her cartoon alter-ego, Andrea faced when she became a mother.

The book is chock full of great Cathy-isms:

She shares her joys and the frustrations of motherhood. As part of the sandwich generation, Guisewite is subject to the push and pull of parenting in both directionsâ€”with her own daughter (who is now in college) and keeping watch on her aging parents. Her stories about trying to bring her 90-year-old parents into the twenty-first century with wireless devices, decluttering and healthy eating are not only hilarious to read but soooo relateable for boomers.

We grew up with Cathy, sharing her boyfriend/relationship challenges, fashion foibles, mother issues, career politics, and we even loved her little dog, Electra. Whatever she faced, we’d faced it too. Too many pairs of seemingly similar black shoes, weight and fashion challenges, bathing suit shame, we’ve all been there. We loved the caring innocence of her mother’s watchful eye, her father’s protective hand and her girlfriends’ empathy and loyalty. As she lived her life, so did we. We shared her pain and rejoiced in her minor triumphs.

Fifty Things That Aren’t My Fault is a fast read. I bookmarked so many pages of her descriptions of issues with her parents that I don’t think she missed a single thing we haven’t all experienced. Ironically, the only thing I think would have improved the book is a few more of her brilliant illustrations. We love Cathy and I thoroughly enjoyed her book. If you’re looking for something on the lighter side, then you’ll enjoy Fifty Things. I’d give it 8 out of 10.

To order a copy ofÂ Fifty Things That Aren’t My FaultÂ by Cathy Guisewite from Amazon, click here.

Disclosure: You’ll receive Amazon’s best price and I may receive a teeny, tiny commission. Thanks.