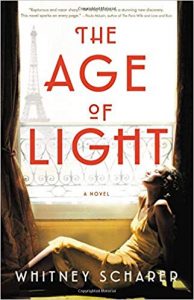 Elizabeth “Lee” Miller was a fascinating woman and I love books about fascinating women. The Age of Light by Whitney Scharer describing the life of Lee Miller in the city of light is such a book. Miller’s glory days were spent in Paris between the wars when she was the lover, muse and assistant to the famous artist and photographer Man Ray. In a classic tale of servant becoming the master, the author takes us on a fictional journey based on Miller’s real life, historical fiction, my favourite genre.

Lee Miller was born in 1907 in Poughkeepsie, New York, the middle child of an amateur photographer and his wife. She had an unusually close and somewhat peculiar relationship with her father who often photographed her and encouraged her artistic nature. By the 1920’s she had moved to New York City where she modelled for Vogue magazine, recognized for her beauty and style. Wanting to expand her career as an artist and leave modelling behind she travelled to Paris. Despite having no connections or referrals, she had ambitions of living amongst the bohemian crowd and developing her career as an artist. In the beginning, she was lonely and unfocused. At a cafe one evening, she meets some American ex-pats who introduce her to an assortment of Parisian free-spirited and creative people at a hedonistic party in the home of a local arts patron. At this same party, she is introduced to Man Ray.

Attracted by her beauty and genuine ambition to learn more about the art of photography, Man Ray hires her as his studio assistant. Their relationship naturally evolves beyond that of mentor and student. Soon they are lovers and Man develops intense feelings for Miller which are reciprocated by the impressionable young woman who is at least two decades younger. As with many creative people, their emotions are intense and mercurial. Both professional and romantic jealousy regularly complicates their relationship. Living, working and socializing together soon becomes more difficult to manoeuvre and they quarrel easily. His ego ultimately supersedes his love for her.

The book begins with a brief chapter on Lee Miller in later life, definitely not her best years. She evolved through several careers over her lifetime. Beginning with modelling, she then earned a reputation as an accomplished photographer and during World War II was an accredited war photojournalist working for Vogue Magazine. Her war experiences included witnessing horrifying scenes of war and she was among the first photographers who entered Buchenwald and Dachau when they were liberated in April 1945. These experiences left her permanently traumatized (today recognized as PTSD) and she self-medicated with alcohol. Later, she became a Cordon Bleu chef and wrote respected columns on food and domestic life for Vogue.

At the end of the war she was given access to Adolf Hitler’s private apartment in Munich where she and a fellow war correspondent spent a few hours alone going through the personal belongings of Hitler and Eva Braun. Miller famously disrobed and took a bath in his bathtub, her first after three weeks in the field, and washed off the dust and grime from visiting the concentration camps.

After the war Miller lived in England where she married and had children. Her life never was as full or as productive as it was in the years prior to 1946 but she soldiered on trying different ways of earning a living. Despite being an accomplished journalist and photographer, she was often remembered only for her relationship with Man Ray. It was the fate of many talented women over the course of history to be remembered only for their association with a famous man and this has resulted in the loss of so many fascinating histories.

The Age of Light was absolutely my cup of tea. I loved every page and wish there had been more. It’s hard to believe this is Sharer’s first novel; the writing is excellent. The research required to string together the life experiences of Lee Miller into this fascinating story is impressive. It’s the nature of historical fiction, however, that certain assumptions and sequences of events are the creation of the author’s imagination. As soon as I started reading and throughout the book, I found myself checking Wikipedia and Googling Lee Miller’s photographs to bring many of the events to life. I intend to read more about Miller and her fascinating life. I’d rate this book 8 out of 10. Loved it.

To order The Age of Light by Whitney Scharer from Amazon, click here.

(Disclosure: If you order from this link, you will receive Amazon’s best price and I may get a teeny tiny commission. Thank you.)