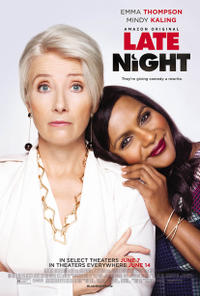 When I left the theatre after seeing Mindy Kaling’s new movie Late Night, I was struck by how much I thought boomer gals would enjoy seeing it, especially since there are so few movies that appeal to us. Then, it occurred to me that men would equally benefit from the movie’s message, although don’t tell them that or they’ll never accompany you. It reeks of ‘chick, flick’ but the message is universal and delivered through clever humour. At times it was a bit soppy, but given Kaling’s excellent writing, it can be forgiven.

Kaling wrote “Late Night” with Emma Thompson in mind for the lead role of Katherine Newbury. It’s the story of a late-night talk show host who is past her prime and the network wants to replace her with a youthful, male comedian who dispenses a steady stream of frat-boy humour that they think is more ratings-friendly. Sound familiar? Much of the action takes place in the television writers’ room where the politics, sexism, ageism and other ism’s that unfold are universally familiar to anyone who has worked in an office environment or anywhere else, for that matter. Listen carefully to the quick dialogue early in the movie and you’ll hear a number of familiar references to the unfairness of pay scales, cultural diversity, and sexism.

Kaling plays Molly Patel, a version of herself, a smart, brown-skinned, ambitious writer and standup comedy aficionado who works at a chemical plant. Through her own ingenuity, she uncovers a job opportunity for a writer at a late night talk show owned by their parent company just at a time when the show’s star, Katherine Newbury demands more diversity in the all-male writing staff. It’s a bit formulaic but fun nonetheless thanks to Kaling’s strong writing and skill in observing human behaviour. It’s a fun movie with some laugh-out-loud moments.

John Lithgow plays Newbury’s supportive but ailing husband, with dignity and intelligence. Reid Scott is a nice piece of eye candy as Tom Campbell, the writer of Katherine’s daily monologue. (I loved him in his earlier role of Dan Egan in HBO’s VEEP with Julia Louis-Dreyfus.) There are a couple of fun cameo appearances by Bill Maher and Seth Meyers which ups the ante a bit. And Emma Thompson has a killer wardrobe.

I went into this movie already a fan of Mindy Kaling. As one of the former writers and stars of The Office” and The Mindy Kaling ProjectÂ and author of two books (Is Everyone Hanging Out Without Me?and Why Not Me?), both of which I’ve read and reviewed, Kaling deserves credit. She’s smart, funny and talented. Great combo. Late Night is a nice way to spend an afternoon. Show your support for women writers, actors and feminist themes and go see Late Night with a couple of girlfriends. And, if you can trick the men in your life into thinking it’s not a chick flick, they’ll learn something too. I’ve always maintained that re-educating men on privileges and issues they take for granted is good for everyone. And that is one small step for women at any time of the day or night.
Late Night (2019) – Rotten Tomatoes