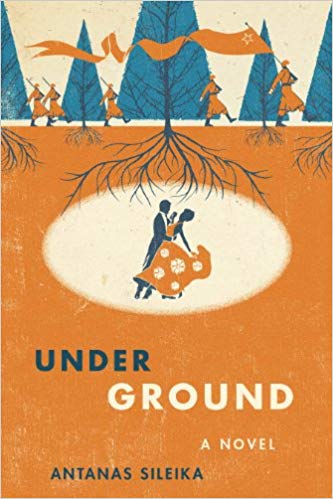 Whever I read a book like Under Ground by Antanas SileikaÂ  I’m reminded that we won the lottery being born in Canada. The rights, freedoms and privileges that we enjoy as Canadians are shared by so few in the world. After World War II, the three Baltic states of Latvia, Lithuania and Estonia were basically abandoned by the Allies and left to be plundered by the Russians. After being pummelled both physically, morally and politically by the Germans during the war and then the Red Army, Lithuania was a country destroyed. Everyone was considered a traitor to one side or the other.

In a heroic effort to save their country, rebel armies of partisans formed in forest camps. Consisting of former soldiers, students, farmers and workers, the partisans lived literally below ground, in small earthen bunkers they dug deep in pine forests to conceal their location from the Red Army and its supporters. If you ever watched the 2008 movie Defiance with Daniel Craig you’ll have an understanding of the primitive conditions under which the partisans lived their lives and fought their counter-offensive. The main difference is these people were not Jews hiding from Nazis; they were mainly Catholics fighting for their lives and for freedom.

Lukas, a student and the son of a farmer, is forced to leave university after the war because both he and his seminary-attending younger brother are at risk of being deported to a Siberian labour camp. They join the forest-dwelling underground partisans. Lukas is a cut above the average with his intelligence and language skills so he soon becomes a communicator as well as fighter. After two years of feral existence, he marries a female partisan, Elena. Love affairs and particularly marriage are discouraged because love weakens partisans and makes them vulnerable to capture.

During a particularly bloody confrontation, Lukas is separated from his wife and she is shot by the Reds. Through partisan channels and his own wits, Lucas escapes to Sweden and eventually lands in France. Desperate to call attention to the plight of the Baltic states, he begins speaking to expats and sympathizers to help raise funds for their cause. He has become a bit of a folk hero, well-known among Lithuanians for his heroic attacks on the Reds but he longs to return to his home and rejoin the fight.

This book is based on a compilation of true stories kept secret behind the iron curtain for decades. Antanas Sileikais is a Canadian-born author of Lithuanian heritage and a graduate of The University of Toronto. The story spans the final years of the war until 1950 and in an interesting twist reveals a Canadian connection at the end. I don’t want to give too much of the story away because it’s a fascinating read that you should enjoy for yourself. As baby boomers, we are a product of the end of that war and reading this book serves to remind us all how lucky we are that we were born when we were and where we were. This is a 9 out of 10. I highly recommend reading Under Ground.