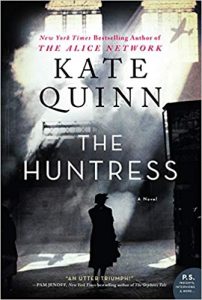 As a fan of historical fiction, I just love it when I get my hands on a book I can’t put down. That was the case withÂ The HuntressÂ by New York Times bestselling author Kate Quinn, who also wrote The Alice Network. The story links three disparate female characters and a British journalist from different backgrounds in a series of events that take place between the early 1940s and early 1950s. The author has drawn from the lives of real people and events to create a mystery that gets resolved by bringing the three women together.

Nina Markova is a feral Russian raised in the wilds of Siberia in an unloving family. Her only hope for any kind of life is to head west and escape a miserable future of life-threatening winters and Stalinist oppression. When she encounters a downed airplane in the Siberian wilderness, she is fascinated with the pilot’s story and the prospect of flying a plane. When her drunken father nearly kills her, she escapes west with the goal of learning to fly. She eventually becomes part of Russia’s elite corps of women pilots charged with flying night bombing missions over approaching German forces in western Russia. They were known as The Night Witches by German soldiers who were the victims of their nighttime raids. The women aviators would turn off the engines of their planes before they silently descended to drop their bombs so their victims would not know where they were or where they were coming from. These expert women pilots with nerves of steel would then restart their engines and go back to base for refuelling, often flying as many as eighteen missions in a single night.

While Nina is bombing Germans during World War II, Lorelei Vogt, the mistress of a senior Nazi SS officer is furthering Hitler’s insane programs by conducting party games that involve hunting and shooting escaped Jews, allied soldiers and other so-called enemies of the Reich in Poland. Even children are not too precious to escape her murderous sights. When she kills the younger brother of British war correspondent Ian Graham in cold blood, she lines herself up in his sights after the war when he works as a free-lance Nazi hunter.

Jordan McBride is the daughter of the Boston-based owner of an antiques shop who meets and marries Lorelei Vogt after the war when she escapes using false identities with thousands of other war criminals to America. When Jordan finishes high school she is discouraged by her father from pursuing a career in photojournalism because he thinks she would be better off marrying her local boyfriend and living a simple life as a housewife and mother. Suspecting that her new stepmother is not all she appears to be, Jordan bonds with Lorelei’s young daughter Ruthie while keeping a cautious eye on the secret life of her stepmother.

The author has mingled real-life events and condensed real-life characters into composites to tell a story that is fascinating, horrifying and engaging. Nina Markova is the most fascinating of the main characters and despite the gruesome subject matter, her journey is punctuated with love, humour and adventure that is a joy to read. There are certainly flaws. The romantic episodes are a tad clichÃ© and somewhat gratuitous. Portions of the plot turns seem implausible but it is just a story and despite the shortcomings, it kept me engaged the entire time. I was constantly pushing on to see if The Huntress would be caught. And if she was, would she be the subject of revenge or justice. Next on my “To Read” list is “The Alice Network”. Kate Quinn certainly knows how to write a great story. I’d give it 8 out of 10.

You pay Amazon’s best price and I get a teeny, tiny commission. Thanks. 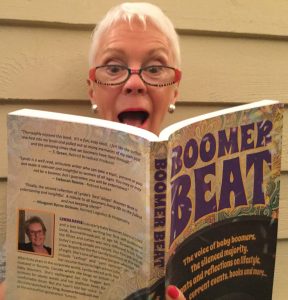