Will the never-ending news about the legalization of marijuana in Canada ever stop? I’m sick to death of the monopolization of every form of radio, television, internet and print media for weeks focussing on nothing but the pros and cons of our newly legal recreational and therapeutic weed. I’m sure it’s a fascinating subject to many people but I’ve had enough of the over-reporting. It’s like watching O.J.’s white Bronco all those years ago.

I think I finally understandÂ  the difference between THC (tetrahydrocannabinol) which has mood elevating effects and CBD (cannabidiol) which is primarily used for medicinal purposes, although I had to Google it to be sure. As someone who stops after a glass or two of wine (which I enjoy enormously, but had to curtail because it gives me an instant hangover), I really don’t like my brain operating beyond my control. Just a personal preference not shared by many people, but I am what I am. 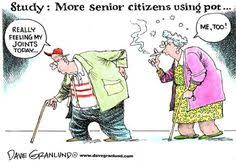 The chemical analysis and application of various strains of weed and its attendant effects on human beings has been discussed, analyzed, explained and debated by so many sources for so many weeks lately I should be an expert by now but mostly I’ve tuned out. Being a non-smoker means that when my ailments require me to look at its medicinal properties, I’ll probably opt for the gummy bears or brownies. I have no objection to getting a little help with pain or sleep issues, but getting high is just not on my radar. For those individuals who feel the need to self-medicate or alter their mood, that’s none of my business. We all have different ways of getting through life.

Canada’s liberal attitude toward marijuana, gay marriage and other social issues is to be commended. Our prisons are full of recreational users who probably should not be there. Baby boomers came of age when it was still illegal to be homosexual in Canada. It was finally decriminalized in 1969 although persecution in the military and police forces continued for another twenty-five years. I’m not qualified to present a case for or against illegal drug use but I am proud that Canada is finally eliminating the criminal aspect of using recreational weed. The end of liquor prohibition didn’t result in America descending into Dante’s inferno and neither will the legalization of marijuana. There will be problems for sure, but it’s up to us as a society to manage the inevitable bumps in the road and over time that will happen.

Now that simple possession of marijuana is legal in Canada, maybe our nightly news can once again return to its regular, unending reporting of murders, stabbings, wars, robberies, car accidents, rip-off scams, political disasters and other everyday events. Can you believe, I’d almost welcome it. It’s time to move on, with a little help from our friends.

Totally agree………I’m tired of this being the news “loop” for a week! There are more pressing issues to report on.

My mother always said everything in moderation…..what has happened to common sense these days. I agree with this blog totally and all talk about marijuana is too much…. Just like when the media was reporting flying tires… Seemed like a hot topic daily…. I was afraid to get on the highway as it seemed like an epedimic. Or the media build up to the turn of the century and how the world was going to come to an end, computers were going to crash, etc. Weed Wednesday came and went….. No haze of smoke over the city, no crowds of… Read more »

Life goes on much as before, only now it’s legal, finally. Always appreciate your well-thought-out comments.