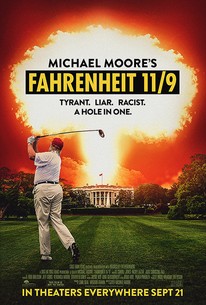 As if we weren’t frightened enough already by what’s happening south of the border, Michael Moore just added the finishing touches with his current documentary Fahrenheit 11/9 which is now showing in movie theatres. (Coincidently, I’m also currently reading FEAR by Bob Woodward.) Call me a masochist but watching the fall of the United States of America is fascinating and tragically sad at the same time. We knew when we went to see Fahrenheit 11/9, written, produced and directed by Moore, that it would be an unsettling experience and our worst fears were realized.

The breakdown of American society and the corruption of their democratic system are sad to witness. Most of the movie’s content is predictableâ€”how on earth did someone like Donald Trump ever get elected and what does the future hold? Moore spares no one in his condemnation of politicians. Both the Republican and Democrat parties are rotten within, to the extent that Democratic party big-wigs cheated Bernie Saunders out of winning certain states by falsifying the voting results to put third-place Hillary in the lead.

Understandably, a great of time is devoted to the tragedy of the water system in Flint, Michigan, Moore’s home town. It’s a metaphor for greater social problems. Citizens are being exposed to permanent, irreversible health problems as a result of drinking polluted water with a high lead content, something that was totally preventable, fixable and still remains unfixed. Even President Obama was complicit. When he visited Flint, a largely black community, the locals thought that finally they would get their water source rerouted from the Flint River to its original safe source, Lake Huron. They were expecting acknowledgement of their problem, help from FEMA and a return to clean water. Obama even pretended to drink the water, smiled, shook hands with the locals, flew off in Airforce 1â€”and nothing changed. That lack of action and casting aside of their concerns left the people of Flint feeling defeated. As a result, they realize their legitimate concerns fell on deaf ears and their votes are meaningless.

The explanation of the teachers’ strike in various states starting with West Virginia was particularly enlightening. Teachers’ wages are below the poverty level in many American states (very different from Canada) and when they were on strike the teachers still had food drives and delivered meals to children at home who receive their breakfast and lunch every day through the schools. Otherwise, those children would go hungry. In order for teachers to receive any kind of health insurance, they were required by contract to wear FitBits to confirm they were getting in 10,000 steps a day. This punitive decree was signed into law through the collaboration of a weak union and a fat, old, white-guy governor who probably has never walked 10,000 steps in his life.

Fahrenheit 11/9 is a followup to Moore’s earlier Fahrenheit 9/11 and a riff on November 9th, the day Trump was elected. Moore equates that day with a disaster for America right up there with 9/11. He takes a lot of criticism for his extremism and sensationalism but we need people to draw attention to what’s going on. It’s a disturbing movie but an absolute must-see. No one benefits when everyone looks away and assumes good will prevail. Just ask any German who lived through the 1930s and 1940s.

On the bright side, the surge of indignation and anger over the state of democracy in the United States has prompted many formerly passive, intelligent side linersâ€”a great many of them womenâ€”to become involved in the nasty business of politics in an effort to get things back on track. It worked in Iceland where the women took over and got the country sorted out. Hopefully they can put an end to this horror show before it’s too late and the apocalypse occurs.

We caught a matinÃ©e and it was reassuring to see so many single boomers in the theatre. The subject matter obviously resonates and they took the time to go see and support Michael Moore’s documentary. I hope you do too.

Saw it on Tuesday. I agree with every one of your observations. Parts of it even made me weepy. Chilling. A must see.