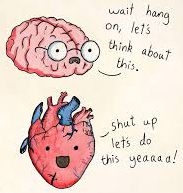 Emotion trumps logic. That statement explains so much. Like why the Americans elected Donald Trump as their President. Or why the Canadian government is building temporary housing for asylum seekers crossing into Canada illegally at remote border points instead of turning them back to follow proper channels. Why should Canadians be spending tax money to house and support illegal immigrants when legitimate immigrants who follow proper legal channels often have to wait years? It makes no sense. Or why British Columbia is blocking the pipeline. As many Britons are now realizing, Brexit was obviously an issue influenced more by feelings of nationalism than practicality. So many unexplainable outcomes are the result of human beings letting their hearts overrule their heads. It’s why so many women fall in love with bad choices in men. I did. Once. When I was very young and stupid. Learned my lesson.

We know we shouldn’t put that designer purse on our credit card because we can’t live without it. But the smell of fine leather and the dreams of being transported into a rarefied stratosphere of pleasure overrules common sense. We can’t afford to get the oil changed in the car but we can rationalize dropping the equivalent of a month’s rent on a luxury consumer item. Those designer sunglasses cost more than groceries for a month but we slap down the old credit card despite the obvious stupidity of the purchase. Instant gratification beats logic. 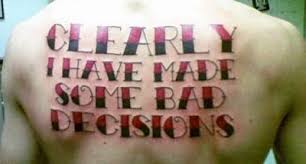 Tattoos are cool and everyone is getting one. Do you still want to live with a faded, wrinkled, distorted picture of a rose after it’s endured thirty years of wear and tear on your forearm? What seemed like a good idea at the time may not be as appealing down the road. A bad choice in hair colour grows out. Tattoos do not.

Men also aren’t immune to the pull of instant gratification in consumer purchases. It’s mind-blowing how they can rationalize purchasing a shiny new truck or SUV without having the cash in the bank. In fact, I’ve observed that men’s toys generally come with a much higher price tag than women’s. Vehicles, boats and electronics aren’t cheap. The experts are right when they advise it’s not always in our best interest to try and outbid someone with deeper pockets just because we can’t imagine not owning that house. No one’s immune. Men, women, governments, voters, corporations, even really smart people fall prey to the pull of the heart, often with disastrous results.

One of the greatest benefits of aging is the wisdom that usually accompanies it. Baby boomers have made more than our share of mistakes and bad decisions over the years and we’ve learned a lot. Hopefully most of my mistakes are behind me. But, I’m still acknowledging the infallibility of the adage that heart generally trumps head, and the truth is when I look at the world around me, some things never change. It’s mind-bogglingâ€”the eternal conflict.

We try. Thanks Susan.

Another wrinkle – a logical decision for one person is an illogical decision for another! I completely understand the logic of choosing President Trump and Brexit. Canada’s illegal immigrants and blocking new pipelines – those don’t seem to be common sense decisions to me!

Decisions are always highly subjective. What is good for me might not be good for someone else. Thanks for your comments, Margy.