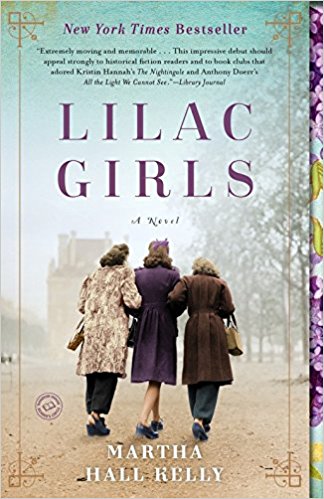 Best-seller Lilac Girls by Martha Hall Kelly was not easy to read. At the same time, it was not easy to put down. It’s the compelling story of three women from three different countries during World War II and author Martha Kelly tells their individual stories in the first person so we feel intimately connected to each one. What makes this book particularly engaging is it’s based on the lives and diaries of real women; two of the names are real; one a pseudonym. Other characters are composites and some are fictional for the sake of the narrative. The lilacs referred to in the title form a common thread in various locations in the story.

Kasia is a young Polish high school student whose sister is a doctor. The family is horrified to witness the abuses inflicted by the Nazi Party. She naÃ¯vely chooses to help a school friend by engaging in underground activity which attracts the attention of local authorities. Despite being practising Catholics, the family members are deemed political enemies. Kasia, her sister and their mother are deported in 1941 to RavensbrÃ¼ck concentration camp for women in Germany.

Dr. Herta Oberheuser practised the most evil sort of medicine at RavensbrÃ¼ck and was the only female doctor at the camp. She was a true Nazi and even during her trial at Nuremberg and incarceration after the war she showed no remorse for the horrors she inflicted on the women who were known as “lapins” or experimental rabbits. The author created a speculative story about a real person. Along with dozens of other young women, Kasia and her sister Zuzanna are subjected to multiple medical experiments by Oberheuser and her associates. Camp doctors broke bones, removed flesh and otherwise mutilated the young women to replicate and test the effects of various battle injuries and treatments that could be used for German soldiers. Their wounds were deliberately infected with gangrene, shards of glass, dirt and various bacteria as part of the experiments.

Caroline Ferriday was an unmarried New York socialite and former Broadway actress who volunteered at the French consulate in the early years of the war.Â  When the consulate was closed during the Nazi occupation of France her volunteerism went into high gear, assisted by her mother who was a long-time activist for worthy causes. The family also owned an apartment in Paris where prior to the war they had spent a great deal of time. Caroline took a particular interest in French orphans, raising money and collecting clothing and other items to be boxed and sent to France. With her network of influential friends and by selling many of her personal belongings, Ferriday was untiring in rallying support for victims of the war.

Many of the RavensbrÃ¼ck women survived the war and formed a collective group sponsored and supported by Caroline Ferriday. With her elite connections, she was able to raise funds to bring many of the women to the United States for medical attention aimed at repairing the effects of the experiments they endured at RavensbrÃ¼ck. The relationship between Ferriday and her group of women continued until her death in 1990. The book is the story of strength, endurance, persistence and compassion. And it’s a reminder that one person can make a difference. Rating: 9 out of 10.