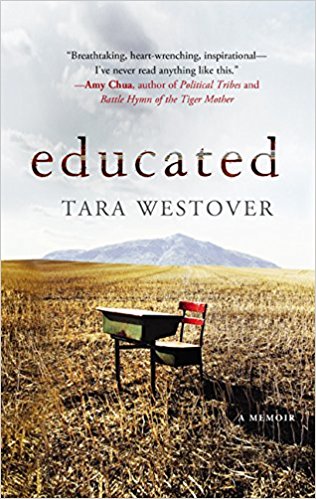 Tara Westover’s best-selling memoir EducatedÂ is a success story similar to J.D. Vance’sÂ Hillbilly Elegy and Jeannette Walls’sÂ The Glass Castleâ€”and I loved them all. Stories by people who rise above disadvantaged circumstances fascinate me and are an inspiration to those who struggle. When we look at several children raised by the same parents in the same environment, we wonder what makes some seek higher meaning while others remain satisfied with the status quo.

Westover was the seventh of seven children born to devout Mormons in Idaho. Their strict devotion might not have been so much religious as just plain bizarre. While father Gene quoted the bible extensively and purported to listen only to the word of the Lord, we have to wonder whether his take on God’s word was what God intended. He was supported unquestioningly by his wife. They were intensely opposed to formal education and did not want their children corrupted by outside influences or potentially ungodly guidance in the public school system. So the children were pseudo home-schooled, which in reality meant they were taught basic reading and writing but beyond studying the Bible, they were totally ignorant.

Father Gene was convinced the day of reckoning or ‘illumination’ was imminent and kept the family a high state of alert and constant preparation. They canned home-grown fruit and vegetables, stored gasoline in a giant tank buried in the yard and salvaged whatever they could for survival. He earned a basic living by running a junkyard and doing minor construction jobs building barns and sheds in the community. He operated under the misguided assumption that the feds were out to get them and destroy their family. Westover’s mother earned money as an unqualified midwife for the local Mormon community and she had a side business making herbal medicinal potions.

The children all worked in their father’s junkyard and construction businesses incurring numerous injuries which never received proper medical attention. Westover was subjected to extreme bullying and physical abuse by an older brother while the parents failed to protect her. Both maternal and paternal grandparents, who were also Mormon did not share the family’s strict dogma and constantly tried without success to intervene on behalf of the children. Two of her older brothers escaped their toxic home environment by studying and qualifying to go to college. At the age of sixteen, Tara Westover wanted the same for herself so she spent a year self-educating and after two attempts, succeeded in passing the multiple choice entrance exams. Using money she had saved, she entered Brigham Young University and was confronted with how little she knew of the real world. Her basic life skills were abysmal. She had no conception of spelling or grammar. Even personal hygiene was something that not been practised at home growing up and her college roommates had to educate her on regular bathing, cleaning up her kitchen messes and dressing appropriately.

While surrounded by fellow Mormons at BYU it became obvious her father believed in a different God. “I’d been aware that although my family attended the same church as everyone in our town, our religion was not the same.”Â  Westover had no conception or knowledge of geography. She didn’t know Europe was a continent or that France was a country within Europe. She’d never heard the name Margaret Thatcher, FDR or even the meaning of the word ‘Holocaust’. Her general knowledge of life outside the community she grew up in was shockingly inadequate. Despite a rocky start at college, Westover, worked extremely hard to catch up, persevered and finally excelled. As a result, she was awarded a scholarship to attend Cambridge in England where she studied before being further recommended for study at Harvard University.

Writing a memoir at the age of twenty-five may seem a bit premature but as proven and documented by author and psychologist Catherine Gildiner, many young women have lived remarkable lives in the first quarter of their lives. Westover ultimately earned a BA from Brigham Young University, a MPhil from Trinity College, Cambridge and a PhD in history from Harvard University. That’s quite an accomplishment for someone who was practically illiterate at sixteen and suffered significantly at the hands of her family. I’d give this story 9 out of 10.

To order a copy of Educated by Tara Westover from Amazon, click here.

To order a copy of Hillbilly Elegy by J.D. Vance from Amazon, click here.

To order The Glass Castle by Jeannette Walls from Amazon, click here.