The further I got into The Revolution of Marina M. by Janet Fitch, the more parallels I saw with Margaret Mitchell’s Gone With The Wind, but in set Russia instead of the American south. 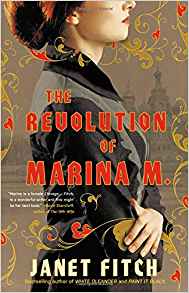 Has there ever been a Russian novel written that isn’t dark and tragic? Despite the nature of the genre I actually love stories about Russia, historical fiction and non-fiction about a country that remains mysterious to outsiders. I enjoyed Dostoyevsky’s Crime and Punishment and Tolstoy’s Anna Karenina as well as a number of other Russian novels. The Revolution of Marina M. by Janet Fitch (who also wrote White Oleander) is the story of Marina Makarova, a young woman born into a privileged Russian family in Petrograd/St. Petersburg. She comes of age during the First World War when Russia is collapsing under Czar Nicholas and the working class is rising up in revolution. Turning her back on her family and the bourgeoisie, Marina turns to a bohemian life amidst revolutionaries, poets and anarchists. She has a love/hate relationship with her parents, misses her older brother who is away fighting the war and deeply loves and feels protective of her sensitive younger brother.

As the revolution and its supporters intensify their drive for power, Marina’s life unravels in a series of tragic events largely the result of her bad decisions as a naÃ¯ve eighteen-year-old. Her intentions are often noble but she’s easily side-lined by selfishness, impulsiveness and a lack of vision. She’s intelligent, writes poetry and sympathizes with both sides of revolution. Like Anna Karenina, she possesses a strong libido and a couple of the sex scenes are a bit unsettling but it’s part of a great story.

Marina goes through a fascinating series of lovers and locations in her quest for happiness. At one point in the story she returns to her family home in search of her vulnerable mother to find the grand residence has been occupied by the ‘proletariat’. Just like the scene from Dr. Zhivago when Yuri returns to his family home after the uprising, Marina finds it overflowing with dirty, bickering squatters. Entire families are crammed into individual rooms; cooking and sanitary conditions are appalling. Instead of freedom and equality, she sees poverty, dissention and anarchy. Her terrified mother and nanny are sequestered in a single room with a few remaining pieces of furniture and personal belongings from their former life.

Following Marina’s life over a three-year period from 1916 to 1919 is an insight into a complex world in a society of complex people. As a scholar of Russian literature, author Janet Fitch’s research is impressive. Born in Los Angeles, she’s skilled at exploring the layers of Russian society, values and history. We can smell the smells, feel the intensity of freezing Russian winters and taste the tastes of starvation rations. There’s even a Rasputin-type mystic. Marina learns “the necessity of misery to help you awaken, but as far as I could see, suffering never made anybody better. It just made us petty and irritable and selfish. We got better despite our suffering, not because of it.”Â One of the characters’ perception of Bolshevism and socialism was particularly incisive, “All of a sudden we had people who’d never heard of Steiner or Blavatsky. They just wanted to open their mouths like baby birds and have us feed them.”

In reading this book, we live the life of Marina Makarova as a privileged aristocrat, a bohemian poet, a woman in love and a woman scorned. She’s political and apolitical, a sympathetic character and a seriously flawed character. Readers will recognize many of the feminist struggles from one hundred years ago that still exist today. At more than 800 pages, the book might be a challenge for some people, but I loved every page. If you’re like me and love Russian literature you’ll enjoy this book. The Revolution of Marina M. is Part I of a series with future volumes currently in the works by the author. I know I’ll have my name on the waiting list for Part II.

To order The Revolution of Marina M. from Amazon, click here.

Great review!
I was going to add Revolution of Marina M. to the to-reads list, but was chased off by its length.

Has there ever been a Russian novel written that isnâ€™t dark and tragic?

There’s at least one – Happiness is Possible by Oleg Zaionchkovsky.

I happen to love big fat books that keep me engaged for a long time and if you do too, you’ll be able to wade through this one without any trouble. And I’ll add the Happiness is Possible to my to-read list. Thanks for your feedback.