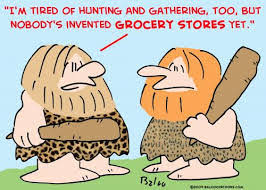 Early cave men were traditionally known as hunter-gatherers, bringing home the wild bacon and mastodon steaks to feed their families after a rough day on the tundra. Their wives then took over roasting the kill over the family fire and kept the cave swept clean in case company came. Things haven’t changed much as I discovered this past week with the tundra now replaced by Real Canadian Superstore. It’s common knowledge among women (gained from years of experience) that men cannot be trusted in grocery stores. They take leave of their senses and the stupid gene kicks in. Before you can stop them they’ve loaded up the cart with giant bags of Cheesies, popcorn, Pub Mix, sugary fruit danishes and gallons of nutritionally questionable beverages.

I’ve written about this issue before (click here to read the original Never send your husband to the grocery store) and it’s obviously a genetic flaw that was passed down through the centuries and endures to this day. When medieval wives screamed that they had enough fermented mead beer already, hubby kept sneaking it in, stashing the barrels behind the pig pen and enjoying a flagon or two when mummy went to visit a girlfriend. Whenever I go away for a few days, I’ve no sooner turned the corner at the end of the street when my husband peels out of the driveway and heads to KFC, after which he and the dog blissfully survive on a bucket of greasy chicken bones and fries. By the time I get home, the recyclers have carted away the evidence.

The hunter-gatherer reemerged this week. It was with a great deal of hesitation and reluctance that I asked my husband to pick up a pork tenderloin on the way home from golf. Sounds simple. There were four of us for dinner (the fourth does not eat meat) and I figured that would be a perfect amount to barbecue with a bit left over for the dog.

Along with the meat, in he came with a super-sized bag of Chicago popcorn, two giant bags of Brookside chocolate-covered blueberries, a bag of Kilimanjaro deluxe chocolate nut mix (“it’s the healthy kind with 70% cocoa”), two bags of ripple chips (“but they were on sale just inside the door”), a bottle of Italian salad dressing, a jar of extra spicy salsa and for good measure, a $20.00 lottery ticket. And, instead of getting a tenderloin, he’d bought an enormous full loin of pork that was so huge I could hardly lift it out of the bag. I really didn’t know pigs had loins that big. We have enough to feed mushu pork to all of mainland China for the rest of the year. After cutting it up, I bagged enough pork chops for fifteen (15) meals. My honey still isn’t quite sure what he did wrong and in fact is rather proud of himself. Needless to say, the dog is ecstatic. 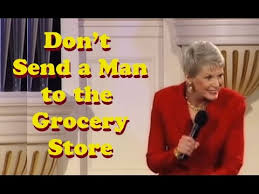 If you haven’t seen it already, check out this hilarious YouTube video Don’t Send a Man to the Grocery Store from YouTube by Jeanne Robertson. Click here.

I hear you girlfriend as I cringe when my husband tells me he has made a trip to Costco. I find stashes of oversized bags of stuff stored away in places all over our tiny condo like he is expecting a major blackout in the city and we won’t be able to shop. First world problems and I’m thinking we should feel blessed.

At least we are aware of the challenges. Thanks Gail.