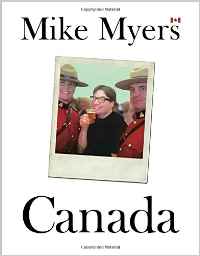 I know I have a tendency at times (sorry!! it’s a Canadian thing) to gush about books I love, so brace yourself; this is a huge gush. We all know and love fellow Canuck Mike Myers for his Second City and SNL characters as well as his movie roles in Wayne’s World, Austin Powers and Shrek. The Wayne Campbell character was based on his own teenage self. Being funny requires also being smart and Mike Myers displays an abundance of both in his new book about his love affair with Canada appropriately titled Canada.Â  At nearly four hundred pages, it contains a lot of material but is such a wonderful read I guarantee you won’t be able to put it down (sorry . . . did it again). I read it in less than two days.

Myers’s book is a combination memoir and layman’s guide to all things Canadian. He describes growing up in North York and Scarborough (suburbs of Toronto) with such clarity and relatability that we can practically feel the winter cold, taste the ketchup-flavoured potato chips, hear the shouts on the street ofÂ  “game on”, and smell the Tim Horton’s coffee. I once lived in the same neighbourhood around Fairview Mall and can easily picture him and his friend as young boys trying to score hockey stickers from hapless customers at the Don Mills Road and Sheppard Avenue gas station, or envision his family life amidst the white brick high-rise apartment buildings that dominate the neighbourhood.

Like Wayne Gretsky, Myers is endlessly gracious, tossing out dozens of “thank you’s” to everyone along the way who made a positive contribution to his or anyone’s life. His modesty and lack of ego are typically Canadian. The book explains some of our history, our cultural touchstones like the Toronto Maple Leafs, Canadian Tire and Tim Horton’s. He also references our more sophisticated British-influenced sense of humour which is heavy on irony and understatement. As an actor and writer, he’s tuned in to the nuances of language and provides examples of how Canadians, Americans and Brits differ in speech patterns. He has an amazing ear for subtleties.

His observations of life growing up as a typical Canadian boy are entertaining and enlightening. For many years before cable and satellite, we could only get three television stations in Toronto and as a result of watching Irv Weinstein, Buffalo’s answer to Walter Cronkite (Buffalo: the city of endless fires and shootings), Myers and his friends were always baffled when the eleven o’clock news started with “It’s eleven o’clock. Do you know where your children are?” We all remember that tagline and coming from safe and sane Canada, Myers and the rest of us were left wondering, “What’s going on? Where are the children? Should we get in a car and go down to Buffalo and help find the children?”

After I finished reading the book I checked some of the reviews on Amazon and several people suggested non-Canadians wouldn’t “get it”. I totally disagree. In fact, Canada by Mike Myers should be required reading for every Canadian within and outside our borders. I’ll even go further and suggest it should be required reading for every American whose lack of general knowledge about the world outside their borders, particularly their northern neighbour, is shocking and profound. Myers, who spent the first twenty years of his life in Canada before moving for short time to England then the United States to further his career, agrees. “I live in the States. And you never hear any news about Canada when you live in the States.” Canada, as the title suggests is not an autobiography so there’s a lot of personal information missing about his marriage, family life and what he’s being doing the last few years. It’s a self-described love letter to growing up in Canada, intertwined with history, cultural and political observations of our country. It will warm your heart, just like Mike Myers has done for us for many years now. Schwing!

To order a copy of CANADA by Mike Myers from Amazon, click here.