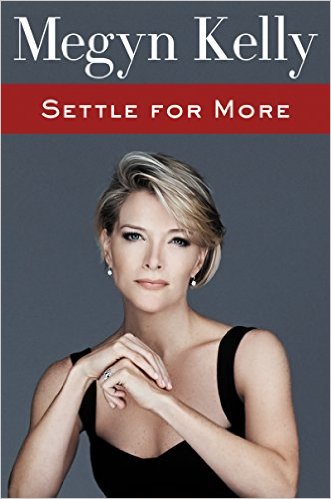 I love reading about strong, successful women. Broadcast journalist Megyn Kelly of FOX TV’s The Kelly Report and author of a new autobiography Settle For More is such woman. Kelly gained a great deal of attention during the 2016 Presidential debates in the United States for nailing Donald Trump with some tough questions. As everyone knows, Trump does not like being put on the spot or having his “truthiness” questioned. He responded by insulting Kelly, demeaning her professionalism, calling her a bimbo and suggesting she was disagreeable because she had her period or some such female affliction. Well, then the shit hit the fan.

Megyn Kelly is probably better qualified than Donald Trump for the job he will soon take over. Just reading her story is almost exhausting in itself. An Ã¼ber achiever in a middle-class family from upper New York State, she built successful careers for herself first in law and then broadcast journalism. While we mouse-burgers (remember Helen Gurley Brown?) can identify with not having the advantages of a great body and beautiful face, Kelly describes how those gifts can be equally perilous. Her childhood was normal and happy until seventh grade when for an entire year, she was the victim of bullying and ostracization by her group of friends at school. Then, magically, after a year of being treated like a leper the bullying stopped. But the experience had a life-long impact.

During her year of being bullied, Megyn Kelly’s defence strategy was proving herself smarter, better and all-round stronger than her adversaries. She grew a thick skin, worked harder at school and generally faked not being affected by the bullying. She was determined to never again allow others to make her feel less than whole, accomplished and valued. After college she attended law school and in a male-dominated field proved herself to be smarter and tougher than her classmates and ultimately her co-workers. Like all young lawyers starting out, she worked killer hours for nearly ten years to build and reinforce her professional reputation. As anyone in business knows, this dedication comes at a price. With no personal life, hobbies or friends, life soon became unbearable. After marrying a promising doctor and moving cities to accommodate his career (where have we heard that before?) she realized she hated her job and was unhappy in her marriage.

Kelly always had an interest in journalism and had in fact been turned down for journalism school before going into law. Starting again at the bottom of the career ladder in a new field, Kelly worked her way through news-on-the-spot field reports, 5:00 a.m. studio reporting slots, researching issues and once again building her credentials as a broadcast journalist. By the time she had her own 9:00 p.m. prime time show on FOX network, Kelly was a recognized name and a player in the reporting of the 2016 Presidential campaign. While all this was happening, she remarried, had three children and unwittingly became the media victim of Donald Trump. Kelly goes into great detail about the chronology and details of the events surrounding her conflict with Trump. She also supported female coworkers in the sexual discrimination charges against FOX News Chairman and C.E.O. Roger Ailes. Megyn Kelly is fair and balanced in her descriptions of both the Trump and Ailes controversies, a skill gained from her years practising law.

Reading about Megyn Kelly’s drive and determination can at times feel overwhelming but she’s also candid about her weaknesses and failures. One of the best lessons she learned from Roger Ailes was to reveal her vulnerable side from time to time; it was humanizing in someone so focused on being tough and successful. The titleÂ Settle For More refers to her mantra, her motivation and there are few people in this world with that kind of stamina. Women in particular, however, often need to be reminded of our value, our accomplishments and our potential. For inspiration about aspiration, read Megyn Kelly’s Settle For More.