A celebrity interviewer once asked Cher what quality she most detests in other people. Her answer was immediate and simple, “Lying.” Cher holds honesty in high regard and the fact that that one question has stuck with me all these years later attests to its profound impact. I have always felt that lies, even tiny “white” ones have no place in daily life. Bear in mind that withholding the truth is not the same thing. For example, in order to not hurt someone’s feelings, it’s sometimes prudent to not tell it like it is. 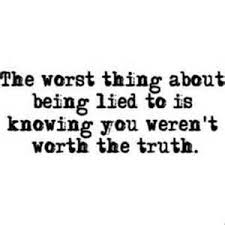 Watching our politicians, business leaders and people in our daily lives utter blatant lies is disheartening to say the least. Much of the plot humour on television shows and in movies originates from and glorifies lying. Imagine how much less complicated our court systems would be if people really did tell the truth, the whole truth and nothing but the truth. Or, before crimes even come to court, if the guilty simply told the police officer the truth. Unravelling a string of lies to unearth that nugget of truth is an exhausting, frustrating and often futile ordeal.

Think of all the lies we’ve been victims of by the big banks during the economic crash of 2008, by Donald Trump, Hillary Clinton, George W. Bush, our own politicians including Kathleen Wynne and the late Rob Ford, not to mention Olympic athletes and celebrities. How much stronger would our society be today if we were treated like intelligent human beings who are capable of handling the truth. 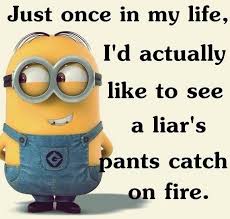 I would like to invent a secret device that automatically detonates and sets someone’s pants on fire when they tell a lie. Much like the swimming pool chemical that turns the water red when you think you’re sneaking a pee in the pool, your lie would be immediately be visible to all. Imagine how different our world would be. Of course, there should be an adjustment to accommodate the question, “Honey, do these pants make me look fat?” Or it might prompt us to stop asking the question. It’s rhetorical. Those pants probably deserve to ignite anyway.

Auto correct bites, that should say the GTA

Why is it that people continue to elect leaders who do nothing but lie to get elected. These so called people of the people have only caused misery for millions of Ontario citizens who live outside the GPA, having us shoulder the costs to rebuild their crumbling city while we get projects that really do nothing to help our crumbling cities. Wynne is the new H. Clinton, liar,liar, pants on fire. How much longer will we have to live under the Papa Docs of Ontario politics.

Great comment Greg. Maybe it’s time I reposted this with updated comments. Thanks for the feedback – and inspiration. Â Lynda Davis Follow my blog at: http://www.boomerbroadcast.net Social commentary on life from a Boomer Broad’s perspective e-mail: lyndadavis1@yahoo.ca For further insights into the Boomer perspective on business, fashion, mind and body, order my new book, BOOMERBROADcast. It makes a great hostess, birthday or Christmas gift. Click on this link: http://www.lulu.comÂ  orÂ http://www.amazon.com