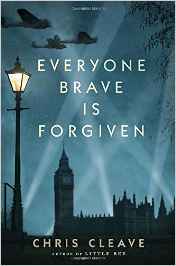 Chris Cleave wrote Everyone Brave is Forgiven after finding his grandfather’s letters to his grandmother written during World War II. Cleave’s grandfather was stationed in Malta with Randolph Churchill, son of Winston Churchill during the siege that left the forces starving and without support. While the story is fictional, it is based on events spanning from the start of the war until June 1942.

Mary North is the energetic eighteen-year-old daughter of a Member of Parliament when war breaks out in 1939. She immediately signs up for volunteer duty and is assigned to teach disadvantaged inner-city London children who for various reasons were not suitable for evacuation to the country. Both Mary and her best friend Hilda are swept up in early war adventures involving love affairs, bombing raids and food shortages, and when they both become ambulance attendants, death and destruction.

The book seemed a bit trite in the beginning and I half expected Mary to utter the words “fiddle-dee-dee”. The dialogue is typically British and at times reads like an old black and white movie script but it soon turns real and the reader is presented with interesting characters, excellent writing and wonderful metaphors. The best bits are the brilliant repartee between Alistair and his senior officer Simonson when they are starving and under constant enemy bombardment while stationed in Malta. The humour is a relief from their grim circumstances.

Fictional accounts of life in England during both World Wars is always a favourite subject of reading material for me and Everyone Brave is Forgiven satisfies this interest completely. Once you get into it, the book is a page-turner which is all most readers want from a book. The story reminds us of the permanent physical and emotional damage inflicted on everyone who lived through it and ultimately the futility of war.