Ya’ gotta love a woman who is so self-possessed, during an interview in front of hundreds of people in a packed auditorium, whips up her shirt and grabs her loose belly fat to make a smiley face, complete with eyes drawn on her bra. In the course of reading her book Moranthology (written five years ago) I viewed a couple of interviews on YouTube and Caitlin Moran did just that. One interview I watched was at our own Bluma Appel Theatre here in Toronto and the other was in Denmark.

British author, columnist, feminist and married mother of two daughters, Caitlin Moran is totally without guile and her strong views on feminism have me rethinking some of my own opinions. Growing up in a three-bedroom council house in Wolverhampton, England, Moran is the eldest of eight children of a disabled father and stay-at-home mother living on social assistance. In her family’s unique interpretation of home schooling, the children were banished to the local library twice a day to read and learn whatever they fancied. “I spent days running in and out of other worlds like a time bandit, or a spy. I was as excited as I’ve ever been in my life, in that library: scoring new books the minute they came in; ordering books I’d heard ofâ€”then waiting, fevered, for them to arrive, like they were the word ‘Christmas'”, she writes. Her experience alone is a strong justification for never reducing funding or closing local libraries, particularly in underprivileged neighbourhoods.Â  Fortunately for Moran, what her education lacked in the basics, she compensated for in a love of reading, learning and personal growth. 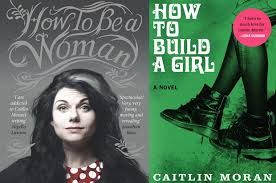 Through a series of serendipitous events, Moran landed a job as a journalist at a very young age. You can read more on her fascinating story in her other books How To Build A Girl and How To Be A Woman. Moranthology outlines her philosophy of life. Her coarse, no-holds-barred delivery is not for everyone but she is totally honest and sincere and I admire her for that. She is committed to the greater good, particularly for women and minorities.

I’ve always been opposed to quotas in hiring of women and minorities as being a form of reverse discrimination but Moran’s argument has me rethinking my position. She writes, “But Cateâ€”if you insist fifty percent of your workforce is women, and force employers to hire them, that means you’re gonna get women who are wildly ill-qualified desk-meat . . . . That can’t be right! . . . Well, it’s not right. It is, however, totally normal. After all, in an office that’s seventy percent men, at least twenty percent of them are going to be wildly ill-qualified desk meat . . .Â  People who are anti-positive-discrimination are ignoring the fact that we’ve been giving jobs to MILLIONS of stupid, unqualified people for millenia: men.”Â Boom! I never thought of it that way and as someone who has witnessed many unqualified men over the years being promoted to positions senior to me in business and making a lot more money, Moran definitely has a point. It was more common when Boomers were building careers than it is now to watch men being promoted to Office Manager, Bank Manager, Principal, Supervisor, Vice-President or even President when there were more qualified, capable women sitting in the wings and being bypassed.

Moran also challenges young women who claim to not be feminists and casually dismiss the subject. She reminds them that unless they work in a sweat shop for barely subsistence pay, have been denied the right to marry whomever they choose regardless of gender, unless they are not allowed to vote or drive a car, or are denied birth control or the right to a legal abortion, then they should be thanking the feminists who worked on their behalf before them and therefore they are feminists. I share her frustration. There’s more work to be done in raising women’s salaries to equal that of men and changing the current laws that punish women who have been sexually assaulted or otherwise abused by men, along with a host of other issues.

One of the most fascinating aspects of reading Moran’s book for me, however, is how some women rise above circumstances that ordinarily would be considered dead-end or at the very least challenging to become successful beyond their social and economic origins. Moran likens the yoke of poverty to being “passed down like a drizzle, or a blindness . . . if kids from a poor background achieve something, it’s while dragging this weight behind them . . .Â  it takes ten times the effort to get anywhere from a bad postcode.” One of my favourite authors, psychologist Catherine Gildiner (author ofÂ Too Close To The Falls, After The Falls and Coming Ashore) is currently researching this subject for an upcoming book she is writing. Jeannette Walls author of The Glass Castle is another example of such a woman. None of Moran’s siblings achieved the level of accomplishment she has despite being raised in the same home, in the same circumstances by the same parents. It’s a fascinating subject and Moran is a fascinating woman.