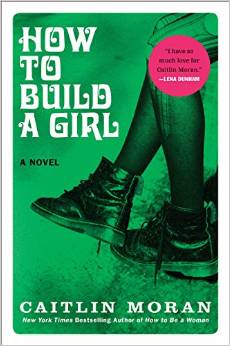 Caitlin Moran’s books aren’t for everyone. Moran is a British columnist, interviewer and broadcaster who authored How To Be A Woman, an account of her life growing up in the Midlands in northern England. She dropped out of high school and became a rock music critic in London. Her latest fictional book entitled How to Build a Girl draws heavily on this background of working class family with many children. This book is not for the squeamish. Moran’s main character, Johanna Morrigan is an exceptionally precocious overweight fourteen-year-old who uses her intellect and determination to grow her brand beyond Wolverhampton. Johanna earns a position writing critical reviews of alternative music groups for an underground publication in London and over a three-year period experiences a lifetime’s quotient of sex, drugs and rock ‘n roll. At times I felt the graphic narrative as being a tad gratuitous but then again, that’s the essence of the book.

Moran is a brilliant writer. She has a wonderful command of slang and idiom peculiar to the northern working class and indie music insiders. While I enjoyed the book it was mainly because of her writing style rather than the story itself. The pace of the narrative is like a bell-jar; it begins at a nice even pace, picks up speed in the middle and tapers off toward the end without actually blowing me away. I would love to see her write about something outside her usual scope but writers are advised to write about what they know and that’s what she knows. Moran views life from a unique perspective and the words she uses to describe what she sees are amazing. I’m definitely looking forward to her next project which I hope will branch out to include a wider range of life experiences.

If you don’t get offended by graphic descriptions of sex, drugs and rock ‘n roll scene, then you’ll enjoy the book. If you’re a bit sensitive, then I’d skip it. But, as I said, I love the way she writes regardless of what she writes.

[…] as a journalist at a very young age. You can read more on her fascinating story in her other books How To Build A Girl and How To Be A Woman. Moranthology outlines her philosophy of life. Her coarse, no-holds-barred delivery is not for […]

[…] Why Not Me and Sylvia Jukes Morris’s two-volume biography on Clare Boothe Luce, How to Build a Girl by Caitlin Moran and numerous other books about strong, successful women. Such was not the case with Amy […]