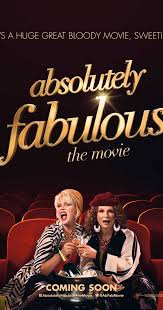 Eddy and Patsy are in townâ€”or more accurately, now in a movie theatre near you, if you’re lucky. The long-awaited Absolutely Fabulous: The Movie has finally been released and I can’t wait to see it. As a long-time fan of British humour and in particular the BBC series starring Jennifer Saunders and Joanne Lumley on which the movie is based, I’m beside myself with excitement. It’s one of the few television series for which I own the entire boxed set of shows dating from 1992.

Absolutely Fabulous chronicles the lives of Edina Monsoon and Patsy Stone who personify past-their-prime fashionistas and best friends who selfishly embrace every new fashion, diet, beauty and social fad that appears. Edina runs her own faltering PR firm and Patsy has some vague position with a fashion mag. Both are brutally self-centred remnants of the hippie era who embrace all of life’s vices including smoking, lite drug use and drinking copious amount of “bolly”. 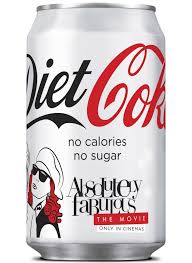 Jennifer Saunders is the creative genius behind Absolutely Fabulous which she writes and delivers with piercing humour. The Globe and Mail actually gave it three stars out of four and while I don’t usually agree with movie reviews, I have a feeling they’re pretty close to the money this time. It’s a cult movie for mature women everywhere. Stay tuned for my review; I’m heading for the movie theatre now. Start the car, sweetie dahling!