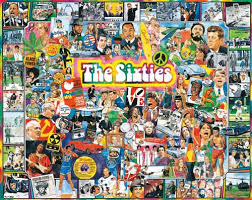 During the sixties and early seventies, my entire life unfolded to the sounds of 1050 CHUM radio playing in the background. Jungle Jay and Bob McAdorey were my musical gurus. I woke up to Down in the Boondocks on the clock radio, made dinner to Donovan chanting Jennifer, Juniper or Tom Jones’ Delila and danced on the weekends to every sixties song charting that week. Music was the energy powering my life. I can still remember the first 45 rpm record I purchased with an entire week’s allowance of one dollar, Teen Angel by Mark Dinning. Sha Na Na kept me rockin’ in the seventies and hating to let go, Don Daynard’s Saturday nightÂ oldies show became my favourite radio program into the eighties.

Sixties music is still my preferred choice for listening and dancing, but music no longer dominates the wall-to-wall sound track of my life. The raunchy sounds of the Stones, the angst of Bob Dylan, the poetic harmonies of Simon and Garfunkel and mind-blowing creativity of The Beatles have been replaced by a preference for talk radio. Is it because there has been so little music since Sounds of Silence or She’s Leaving Home that match the poetry and universal appeal of sixties music? Or is it a natural evolution. In fact, what I now prefer is literally the sound of silence.

Radio and music were an integral part of our lives in the sixties and seventies. The content fed our musical and emotional souls. Radio now provides us with the news, traffic reports and the weather. And I’m becoming increasingly more discontent with it altogether as the news is always bad, traffic reports are merely a source of frustration and anger, and the weather reports are always wrong. I have an ongoing beef with the lack of relevant women’s programming, particularly since Sirius XM satellite radio cancelled my favourite programs, What She Said on Canada Talks Channel 167, The Judith Regan Show on Stars Channel 109 and The Martha Stewart channel.

Our musical icons are frozen in a time long gone. They still touch our hearts, get us dancing in the kitchen when we hear a blast from the past, but blasting ABBA through my brain on headphones has been replaced by watching television with headphones, and interestingly, listening to everything else with the help of hearing aids. Perhaps it’s because there’s stability and happiness in my life now that I no longer relate to the pitched emotions of falling in love, heartbreak, cheating and breaking upÂ  depicted in popular music for young people. Now that our hormones have finally settled down, so have our tastes in music and listening preferences. Bob Dylan sounds just as profound and moving when I now listen to him while sipping an icy Pinot Grigio on the back patio at sunset but without the sadness. I will always enjoy my regular fix of sixties music but I now listen with a smile on my face and contentment in my heart. I think it’s time for a little Simon & Garfunkelâ€”but just a little and not too loud. And maybe some Dusty Springfield too.

Those were the days when a song actually told a story and they used proper English……no rap, no swearing, no violence and it didn’t need to be loud to enjoy it. Yep, we are officially old people and have become our parents!
Gail from Oakville

We don’t need to apologize for what we like. We just have good taste. Â Lynda Davis Follow my blog at: http://www.boomerbroadcast.net Social commentary on life from a Boomer Broad’s perspective e-mail: lyndadavis1@yahoo.ca For further insights into the Boomer perspective on business, fashion, mind and body, order my new book, BOOMERBROADcast. It makes a great hostess, birthday or Christmas gift. Click on this link: http://www.lulu.comÂ  orÂ http://www.amazon.com