Like so many other people, we attended an amazing Super Bowl party on Sunday night with an incredible assortment of foodâ€”different kinds of chili, wings, various chips, veggies and dips, every liquid libation imaginable, desserts, everything anyone could wish for. Our host and a friend had set up a ten-foot projection screen which gave all the guys in attendance a major stiffie. There was also a big-screen high-def television in another area showing THE GAME so it was visible from any vantage point. Sounds like a perfect evening, right? If you’re a guy.

My playoff dilemma this past Sunday night wasn’t about the Bronco’s and the Panthers. I had to leave the party early because in the ladies version of Super Bowl and going head-to-head in the competition was Downton Abbey. It’s in its last season and I didn’t think the guys would appreciate me changing the channel. We’re all on the edge of our seats wondering whether bitchy Lady Mary will land a forever guy before her eggs dry up or her heart turns to ice. Will Daisy pass her exams and lead the Labour Party in a run for Prime Minister in the new world order? Will Anna’s heart breaks be rewarded with twinsâ€”one of each, a boy and a girl?

Potential love matches are springing up all over the place. What are Mr. Barrow and the footman getting up to in those clandestine meetings in Mr. B.’s room? After six seasons of wearily watching Lady Edith shed buckets of tears, will she fall in love again and create a multi-media empire with the guy who works nights with her. Will Mrs. Hughes finally hit Mr. Carson over the head with a frying pan and tell him to cook his own damn meals? Maybe then they’ll be the way he likes them. So many potential plot twists; so many gorgeous new dresses to admire during evening cocktails. 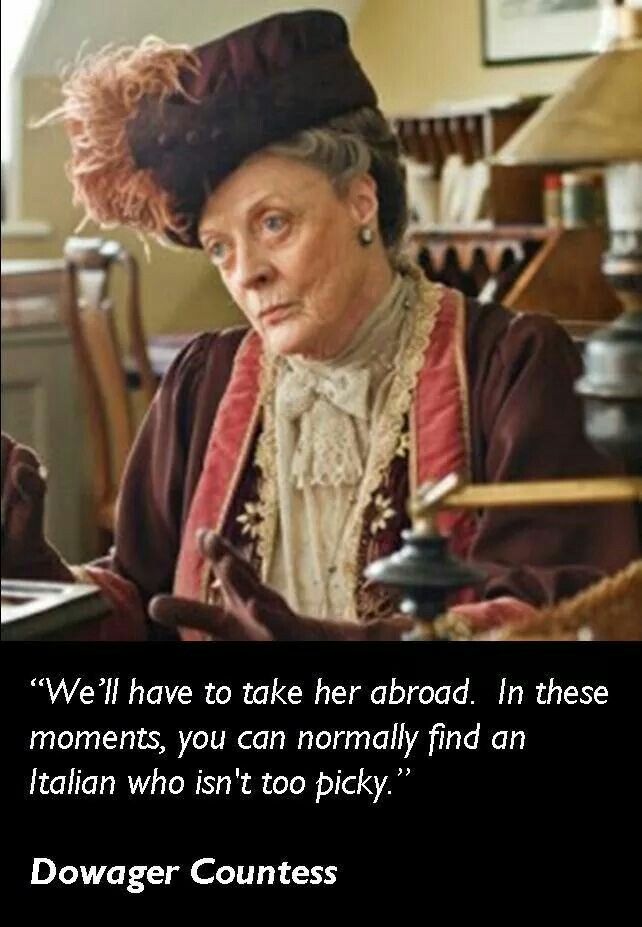 Such delicious, genteel escapism. No concussions, crotch-grabbing, drug-enhanced testosterone chest-bumps or violence anywhere. In fact, at the risk of sounding like I’m over-simplifying (which I doubt), football to me is a giant yawn. All they do is run and get knocked down; run and get knocked down. End of story. Where’s the fun in that? But I do acknowledge the Super Bowl parties are great fun. And the best defensive lines of all? The ones uttered by Dowager Countess Grantham. Go Downton!

Lynda you have again captured the essence of two polar opposites. Football and Downton Abbey. Well said on both!

Thanks Deb. Parties are fun but Downton is not negotiable.

Hi Lynda, Right on – who cares about violent sports where players get hurt to the point they may carry those injuries the rest of their life. I loved Downton Abbey – but I do not have enough patience to wait thru all the weekly shows one at a time – I cheated and bought the entire 6th season at Costco. Never know what might happen tomorrow and I’d hate not know the ending if something happened to me. Now that I’ve seen it all I’ve passed the CD along to other fanatic fans I know. Now watching Mercy Street… Read more »

Thanks Colleen. I haven’t tuned into Mercy Street.The American series never seem to have the same appeal as Call the Midwife, Home Fires and all the other British series. But then, anything beats football! Â Lynda Davis Follow my blog at: http://www.boomerbroadcast.net Social commentary on life from a Boomer Broad’s perspective e-mail: lyndadavis1@yahoo.ca For further insights into the Boomer perspective on business, fashion, mind and body, order my new book, BOOMERBROADcast. It makes a great hostess, birthday or Christmas gift. Click on this link: http://www.lulu.comÂ  orÂ http://www.amazon.com

I commented on this but forgot to add my nameâ€¦â€¦will try to remember in the future. Well putâ€¦..I was so bored and donâ€™t think I will stay for the entire game next year. I talked to Terry today and oma seems much better as they have taken her off the morphine and giving her another pain relief drug. She goes from having the runs to not going at allâ€¦â€¦her system is breaking down unfortunately. Hasn’t eaten since Sunday but now taking broth and can hear her stomach moving it along so hopefully be able to get back to her home.… Read more »

Totally agree…..I am so sick of hearing the sounds of football and hockey coming from the television……but will there be life after Downton Abbey comes to an end….I hope so….perhaps a spin off!

Not to worry. The BBC always comes up with great shows. Â Lynda Davis Follow my blog at: http://www.boomerbroadcast.net Social commentary on life from a Boomer Broad’s perspective e-mail: lyndadavis1@yahoo.ca For further insights into the Boomer perspective on business, fashion, mind and body, order my new book, BOOMERBROADcast. It makes a great hostess, birthday or Christmas gift. Click on this link: http://www.lulu.comÂ  orÂ http://www.amazon.com