Imagine this. Your parents scrimp and sacrifice to pay for your post-secondary education at a top university, seeing it as an investment in your future. You repay them by choosing to cheat on exams, to plagiarise an essay and purchase prepared top-graded papers on-line to guarantee a good mark. Unfortunately, you get caught but instead of expelling you for being dishonest and deceitful, the university rewards you with a prestigious degree, a top job in your field upon graduation and a signing bonus from your employer. Anyone that resourceful and creative about winning deserves the rewards. Right? Then, ironically, your parents are charged with fraud and fined tens of thousands of dollars for raising a child who should have behaved more ethically. How’s that for justice?

Bizzare as it sounds, that’s exactly how the banking system operates. If you happened to see the movie The Big Short, you’ll understand the absurdity and immorality of the situation. Individuals within the large banking conglomerates fattened their own bank accounts by deceiving customers into thinking they could afford more than they fiscally were able to handle, who played complicated numbers games with the professional skill of Las Vegas card counters and then rewarded themselves handsomely for their evil ways. That’s the world of banking in America. 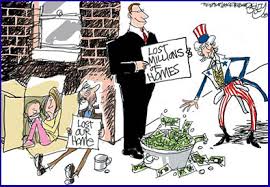 In a brilliant move by legislators and financial regulators, international banks have been assessed with multi-billion dollar fines for permitting their executives to cheat, lie and otherwise deceive the people who pay their wages and fund those huge bonuses. Tragically, it’s not the banking executives who are going to jail, losing their homes or paying fines but the shareholders and customers who deposit part of their hard-earned wages into the institutions’ savings accounts and investment funds every payday. Yes. Morgan Stanley, Credit Suisse, Barclays, JPMorgan Chase and other banking behemoths who were the instruments of unscrupulous and greedy leaders are being punishedâ€”not the unscrupulous and greedy leaders personally. By fining and punishing the institutions (the banks) rather than the individuals, we, the little people who carefully save to buy their GIC’s and mortgages are taking it in the neck, again. Our stock prices suffer but not the people who created the mess.

Give me strength. In what Emerald City somewhere will international governing authorities finally do the right thing and root out the cause of the problem. Have they no brains? We know they have no heart but we keep hoping for some courage to rise above the injustice of the entire financial melt-down mess and eliminate the cancer that exists within the banking system and its associated credit authorities. The corruption is still flourishing with no controls in sight.

As a teeny-tiny shareholder in a bank, I’m being punished for what those greedy, unrepentant criminals did, beginning in 2008 and still going on today. The only upside to the whole stinking cesspool is I’ll never have to worry about paying capital gains. Any potential for me to make money on my savings account or bank stock has been gobbled up by bank executives’ bonuses and fines against the institutions who manage my life savings. It’s not just unfair; it’s unjust. Please sir. No more.