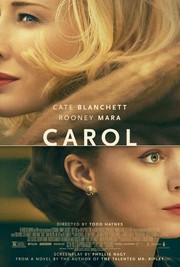 With Oscar season nearly upon us, I’ve been trying to catch as many movies as possible in the bonanza of offerings at this time of year. Last week I went with a couple of girlfriends (how ironic, but not that kind) to see Carol starring Cate Blanchett and Rooney Mara. I must say, we were all totally underwhelmed. I don’t know what I was expecting but with all the hype it certainly seemed to us to fall short of the mark.

Based on a fifties novel entitled “The Price of Salt” by Patricia Highsmith, it’s the story of two women who meet in a department store at Christmas and a love affair ensues. The plot and script are full of improbabilities but that’s the nature of fiction. The movie was beautifully filmed and Cate Blanchett’s nuanced character is lovely to watch. Rooney Mara’s performance was, in my opinion, simply a two-hour display of doe-eyed innocence with subtle undercurrents of precociousness. Within the context of the fifties time period, the movie’s theme of a lesbian love affair was shocking and scandalous, quite different from today’s standards. There are a couple of love scenes that would challenge any straight actor but were beautifully delivered by Blanchett and Mara. It’s a sensitive, tender movie but you might want to wait until it’s on TV. Just sayin’. . . But then I’m not a member of the esteemed Academy so I may be wrong.