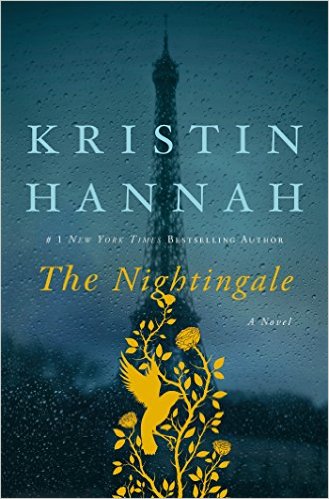 If you enjoyed reading Sarah’s Key by Tatiana de Rosnay,Â All the Light We Cannot See by Anthony Doerr or Suite FranÃ§aise by IrÃ¨ne NÃ©mirovsky then you’ll love the New York Times bestseller The Nightingale by Kristin Hannah. In fact, de Rosnay had a hand in fact-checking for this book. Historical fiction, set in France just prior to and during World War II, it’s the story of estranged sisters Isabelle and Vianne whose lives are forever altered by their individual and different experiences during the war. When their father returns from World War I he is psychologically damaged. While the girls’ mother was alive he was able to cope but when she dies he abdicates all responsibility as a father. He farms the younger daughter Isabelle, who is rebellious and independent, out to a series of boarding schools. Her older sister Vianne who has a totally different personality, falls in love, gets pregnant and marries, staying in their small village southwest of Paris. Their father returns to Paris where he runs a bookstore.

With the start of World War II, the sisters’ lives take totally divergent paths. The younger Isabelle joins the French resistance and is active in hiding and transferring downed Allied airmen through safe homes and escape routes to Spain so they can be returned to England. Vianne’s husband Antoine is a prisoner-of-war in Germany while she tries to protect her daughter and maintain their rural home through the Nazi occupation. With SS officers billeted in her home, Vianne is exposed to her own set of challenges and threats to her family, her Jewish neighbours and local friends. The book starts out slow but quickly picks up once the Nazi occupation begins. I couldn’t put it down.

Yay for sister stories! Sounds like a great read 🙂