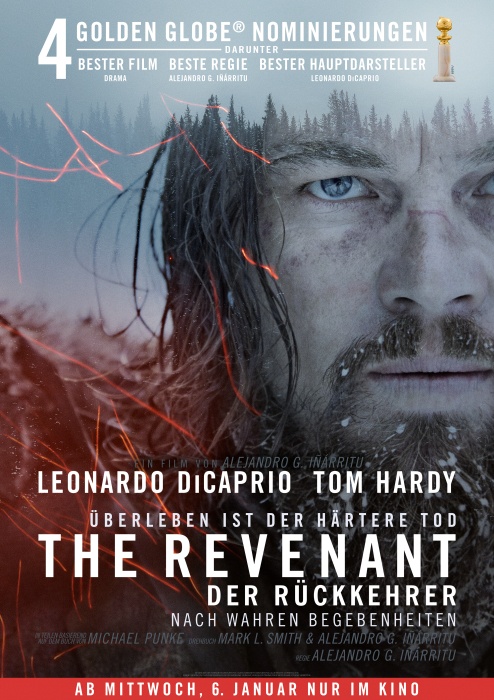 With eleven movies on my current “must see” list, you can expect to be reading quite a few movie reviews on BoomerBroadcast in the upcoming weeks. I’ve already seen Joy starring Jennifer Lawrence and now I can stroke The Revenant off my list. First of all, I had to look the word up in the dictionary. It wasn’t in my little paperback Merriam-Webster version but here’s what good old Google says:

1. something, esp a ghost, that returns

Word Origin
C19: from French: ghost, from revenir to come back, from Latin revenÄ«re, from re- + venÄ«re to come
Â Although it wasn’t my typical kind of movie, I really enjoyed it. The overall feeling reminded me of Grey starring Liam Neeson (my secret lover) released a few years ago. Set in the early 1820’s, The Revenant is loosely based on the true story of a trapper called Hugh Glass who survived a bear attack in the wild. The lead character played by Leonardo DiCaprio is not expected to survive and until help can return, he is left in the care of two men, one of whom decides to speed things up by burying him alive and leaving him in hostile Indian country. Nasty business. DiCaprio manages to escape from his shallow grave and crawls, limps and otherwise hauls himself back to the fort where he partially recuperates before seeking revenge on the man who abandoned him. I won’t divulge any more of the story.
The beauty and appeal of this movie for me was in the filming. Shot in the Canadian Rockies during winter, the scenery is brilliantly depicted with a harshness that is almost palpable. The shop steward from the actors’ union and the insurance company must have been apoplectic that DiCaprio performed so many of his stunts himself. He floated down a freezing river, ate raw buffalo innards, wrestled and rolled around in real snow, ice and freezing water amidst the gore of (fake) blood that made the ground look like a cherry slushie. It was a textural, visual feast superbly directed by Alejandro GonzÃ¡lez IÃ±Ã¡rritu. I recommend it for the visuals alone.

Those survival stories always leave me a wreck as I couldn’t fight my way out of a wet paper bag and feel I should perhaps take some kind of self defense or survival courses just in case I find myself stranded outside my back gate here in Florida, fighting wild boars or pythons but then again if I go out the front gate, the mall is only minutes away……my safe place!

Let’s just be thankful we didn’t live two hundred years ago – or even one hundred years ago. You should read Susanna Moody’s Roughing It In The Bush about pioneer life around Lakefield, Ontario. Amazing. Â Lynda Davis Follow my blog at: http://www.boomerbroadcast.net Social commentary on life from a Boomer Broad’s perspective e-mail: lyndadavis1@yahoo.ca For further insights into the Boomer perspective on business, fashion, mind and body, order my new book, BOOMERBROADcast. It makes a great hostess, birthday or Christmas gift. Click on this link: http://www.lulu.comÂ  orÂ http://www.amazon.com