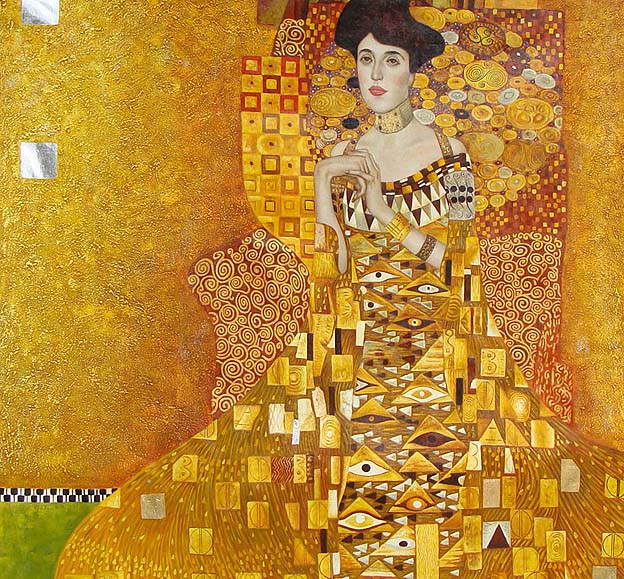 Whenever the names Helen Mirren, Maggie Smith or Judi Dench appear to be starring in a new movie, we can be pretty sure the movie is going to be worth the price of admission.Â Woman in Gold is based on the real experience of Maria Altmann played by Helen Mirren, a wealthy Austrian whose aunt Adele was the model for Gustav Klimt’s famous painting (originally titledÂ  “Portrait of Adele Bloch-Bauer I,”) which was owned by the family and hung in their home. When the Nazis illegally seized the family’s Vienna apartment and its contents at the beginning of the war, Altmann and her opera-singer husband managed a complicated escape from Austria to join an uncle who had emigrated earlier to California. The rest of the family died during the Holocast.

Decades later, in a public relations gesture to appease the thousands of Jewish families who had been robbed of their homes and belongings during the war, a tribunal was set up to review claims to recover personal possessions. By now, Woman in Gold had been hanging in Vienna’s National Gallery for several decades with a status equal to that of France’s Mona Lisa. Obviously, the Austrian government and its representatives were reluctant to give up what they considered to be a major treasure.

With the help of a young, inexperienced and somewhat dull lawyer, Randy Schoenberg, played by Canadian cutie Ryan Reynolds, a case was presented for returning the painting to Altmann. Overcoming various obstacles and acts of greed by the Austrian government made the claim increasingly more difficult and they were often tempted to give up. But persistence and justice prevailed. For the full story and how it unfolded, I recommend you go see the movie. There are no high-speed chases, thrilling action characters or scary zombies. In fact, the script is not particularly well-written (same problem I had with Monuments Men) and the characters could have been depicted with more depth but the story deserves to be heard. And for that reason it’s worth the price of admission.

Thanks for this. Iâ€™m going to see it here on Sunday!

Have a fantastic day!